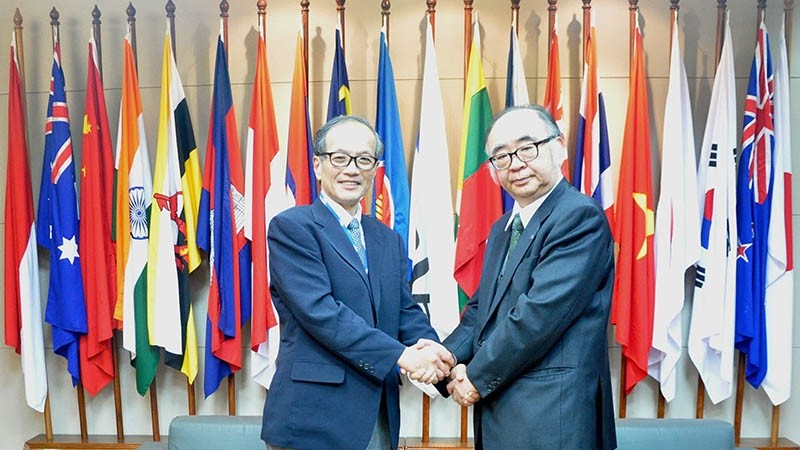 The Economic Research Institute for ASEAN and East Asia (ERIA) is pleased to announce the appointment of Professor Jun Arima as Senior Policy Fellow for Energy and Environment.

His engagement will greatly enhance ERIA's efforts to promote East Asia Summit energy cooperation. Prof Arima is an expert in the fields of energy and environment with rich experience in the policy development as one of the high officials of the Ministry of Economy, Trade and Industry of Japan. He is a Professor in the Graduate School of Public Policy, the University of Tokyo.

Prof Arima began his career at the Ministry of Economy, Trade, and Industry in 1982 (then, Ministry of International Trade and Industry), which was followed by more than three decades of experience in various roles in the field of energy and environment. From 1992 to 1994, he was in charge of multilateral/bilateral energy collaboration as Deputy Director, International Affairs Division, Agency of Natural Resources and Energy (ANRE), MITI. From 1996 to 1999, he was posted in Paris as Councilor of the Permanent Delegation of Japan to the OECD and served as the liaison between the GOJ and the International Energy Agency (IEA). From 1999 to 2002, he served three positions simultaneously in charge of energy efficiency regulations in the industrial sector, renewable energy promotion policies in the power sector, and multilateral/bilateral energy collaboration between Japan and overseas. During this period, he was also heavily engaged in the UNFCCC negotiation for working out detailed rules and modalities of the Kyoto Mechanisms.

From 2002 to 2006, he was assigned to the IEA as Head of the Country Studies Division. He led the in-depth reviews of 24 Member countries covering all the spectrum of energy policies including measures for reducing energy-related CO2 emissions. From 2006 to 2008, he served as Director, International Affairs Division, ANRE, METI and Councilor, International Energy Negotiation dealing with all the multilateral (IEA, APEC, ASEAN+3, EAS, IEF) and bilateral energy collaboration. In 2008, when Japan was the host country of the G8 Summit, he planned, coordinated, and implemented the G8 plus China, India, Korea Energy Ministers Meeting in Aomori.

From 2008 to 2011, he took up the position of Deputy Director General on Global Environmental Affairs and served as the chief negotiator at the AWG-KP in the UNFCCC negotiation process. From April 2011 to August 2015, he was Director General of the Japan External Trade Organization (JETRO) London Office and led investment and export promotion. He was also appointed as METI's Special Advisor on Global Environmental Affairs and continuously participated in the UNFCCC negotiation. He has participated in the COP negotiation twelve times.

Currently, in addition to the Professorship at the University of Tokyo, he serves as Project Leader for the 21st Century Public Policy, a Distinguished Senior Research Fellow at the Asia Pacific Institute of Research, and a Consulting Fellow at the Research Institute of Economy, Trade and Industry.

He has a Bachelor's degree in Economics from the University of Tokyo.