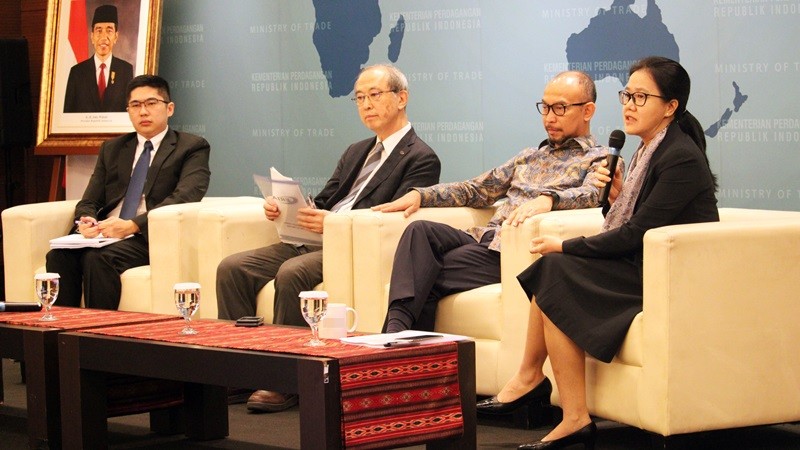 Jakarta, 20 August 2019: Experts on international trade discussed various challenges that lay ahead for the economic integration of East Asian countries during a discussion organised by the Economic Research Institute for ASEAN and East Asia (ERIA) and the Indonesian Ministry of Trade on 20 August 2019 in Jakarta.

The discussion was based on East Asian Integration: Goods, Services, and Investment, a co-publication from ERIA and Routledge edited by Dr Lili Yan Ing, Lead Advisor, the Ministry of Trade of Republic of Indonesia; Prof Martin Richardson, Professor of Economics at the Australian National University; and Prof Shujiro Urata,  Professor at Waseda University and Advisor to the President of ERIA. During the discussion, Dr Ing acted as the moderator while Prof Urata delivered a presentation.

ERIA’s Chief Operating Officer Koji Hachiyama delivered the opening remarks in which he stated that the discussion topic was very timely given the current state of global trade and regional integration, especially with the significant tensions with the US-China trade war, the need to transform the WTO, and a shift towards protectionist policies in many of the world’s largest economies.

‘ASEAN and East Asia need to chart a safe path through these changes – a path that reflects the region’s strengths and ability to adapt. The Regional Comprehensive Economic Partnership – RCEP – is a priority given the multi-polar character of world trade. Trade agreements, Investment agreements and regional production networks are all key to securing a prosperous future for all ASEAN Member States and the region as a whole,’ said Mr Hachiyama.

The Head of Trade Analysis and Development Agency of the Ministry of Trade, Dr Kasan Muhri, delivered the opening remarks from Minister of Trade, Mr Enggartiasto Lukita. He discussed the situation regarding the world economy and Indonesian economy as well as internal and external challenges faced by Indonesia. He also discussed Indonesian export performance and strategy, namely by improving bilateral trade with main trading partners, enhancing exports in East Asia, and forming new trade agreements.

In his presentation, Dr Basri asked the question, ‘What can Indonesia and ASEAN do in the midst of the ‘new normal’ and what is the future path of Asia economic integration?’ He went on to describe the current global situation that has formed ‘the new normal’, global trade, trade in Asia, and intra-regional trade. He underlined the importance of creating a success story to restore trust in the system.

‘What would be the fora for cooperation in Southeast Asia? Let’s say SME, infrastructure. The national agenda of Indonesia is infrastructure, if the ASEAN agenda is also infrastructure, it fits well. Once it is successful, we can move in a more complex things like non-tariff barriers,’ he added.

Prof Urata presented the trends of free trade agreements (FTAs) in East Asia from the 1990s to 2010s. He explained how in the 1980s to 1990s, de facto regional economic integration was driven by trade and FDI by multinational corporations and realised by trade and FDI liberalisation policies. Then in the late 1990s, institution-driven regional economic integration emerged in the form of FTAs. According to Prof Urata, East Asia was a late comer to the FTA frenzy, but it soon caught up with the rest of the world in the FTA race.

‘FTAs promote economic growth by expansion of international economic activities and by improving productivity. FTAs face opposition from potentially negatively impacted people, such as unemployment of workers in liberalised industries. The provision of safety nets is needed to overcome the opposition to successfully conclude FTA negotiations and enact them. Specifically, provision of training and education for improving skills and of subsidies for moving to obtain job opportunities is needed. These safety nets are necessary not just for workers affected by trade liberalisation but also for workers faced with structural employment problems,’ said Prof Urata.

The book East Asian Integration: Goods, Services, and Investment can be purchased directly from Routledge’s website.