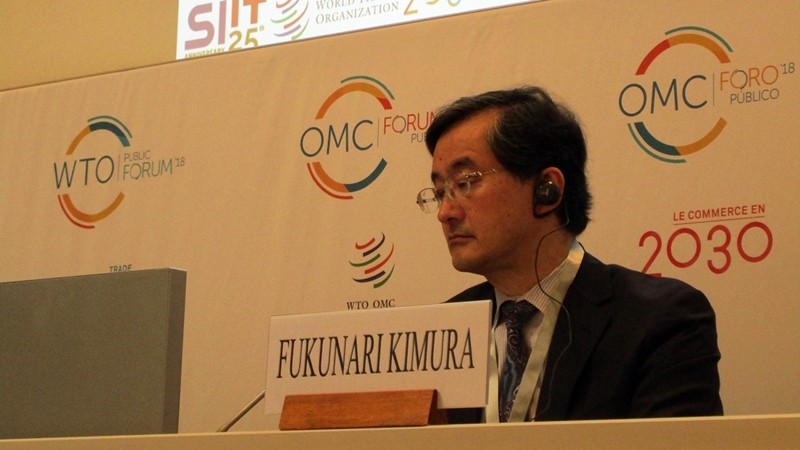 Geneva, 4 October 2018: The Economic Research Institute for ASEAN and East Asia (ERIA) and the Institute of Developing Economies, Japan External Trade Organization (IDE-JETRO) co-organised a working session on the sidelines of the WTO Public Forum in Geneva on 4 October 2018.

ERIA’s Chief Economist Prof Fukunari Kimura was one of the panellists in the working session, entitled ‘Who Should Control Technology Transfer for Trade and Economic Growth?: Global Economic Integration and Industrial Policy in Emerging Asia’. The session was moderated by Dr Yasushi Ueki, Senior Research Fellow from IDE-JETRO.

Prof Kimura delivered his presentation on the international division of labour, particularly about forms of technology acquirement in developing countries. He drew upon Richard Baldwin’s concept of unbundlings in discussing the development of division of labour.

Even though some foreign firms have incentives for improving the productivity of upstream local firms, some other firms may not want local firms to create product innovation. Furthermore, Prof Kimura warned of potential issues related to international technology transfer and digital economy, especially in international rule-making.

‘The issues in the digital economy include the values of data and program codes and how to discipline the government’s interventions. While there are clauses on forced program code disclosure in cyber security laws in some countries, the CPTPP and Japan-EU EPA have ban forced disclosure of program codes. And to achieve “free flow of data”, we need a series of back-up policies that would cover consumer protection, privacy, IPR, competition policies, taxation, culture and cyber-security. These are the policy environment we have to think about in the digital economy,’ said Prof Kimura.