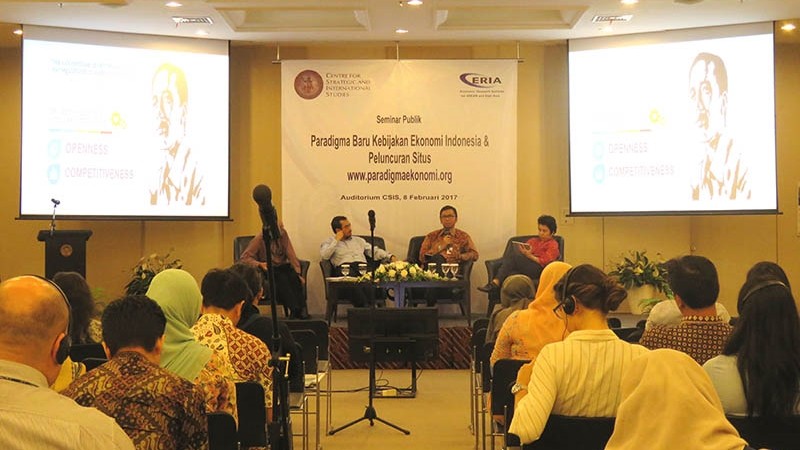 The Economic Research Institute for ASEAN and East Asia (ERIA) and the Centre for Strategic and International Studies (CSIS) launched the Paradigma Ekonomi website www.paradigmaekonomi.org on Wednesday, 8 February 2016.

A public seminar entitled 'New Paradigm of Economic Policy in Indonesia' was held in conjunction to the launch. Indonesia's Coordinating Minister for Economic Affairs H.E. Darmin Nasution and the Head of Indonesia Investment Coordinating Board Thomas Trikasih Lembong delivered keynote speeches during the seminar.

Thomas Lembong welcomed the new website, while noting that Indonesia was still trapped in an outdated yet deeply-rooted paradigm. 'We are still trapped in an obsolete paradigm that has been abandoned by many other countries, such as the need to overly protect domestic industries and that 'exports are good, imports are bad'. We should change our way of thinking and shift our paradigm. The reality is not like that. Industries nowadays are not like that,' said Lembong.

As noted in the 'About This Project' section of the website, CSIS and ERIA aimed to contribute to the Government of Indonesia 'by providing knowledge, ideas, and updated information which will help the President and his government in putting effective economic policies in place that can respond well to current challenges. This activity is also intended to trigger public discussion on several economic problems and challenges facing Indonesia, and to conduct communication of some new paradigms that can be used as the basis for alternative economic policies by the government to address the current problems.'