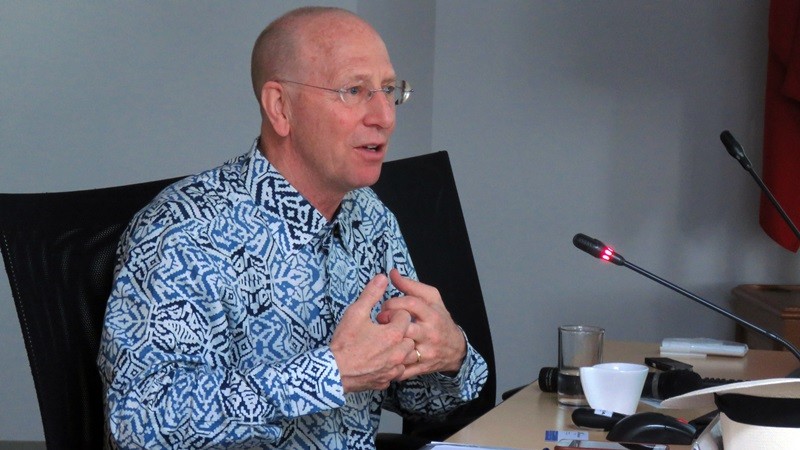 The Economic Research Institute for ASEAN and East Asia (ERIA) and the Centre for Strategic and International Studies (CSIS) held a private discussion on 2 May 2017 in Jakarta with Prof Richard Baldwin, one of the world's greatest thinkers on globalisation, on the issues discussed in his recent book The Great Convergence: Information Technology and the New Globalization.

Prof Baldwin stated that the basic idea of his book was to make people think differently about globalisation and to narrow the way people conceptualise globalisation. He explained how technological advancement in information and communications technology (ICT) has lowered the cost of moving ideas, which started knowledge-led globalisation, also known as knowledge offshoring. Companies could take the knowhow from advanced economies and moved the production to emerging economies where the wage level is lower. This resulted in economic anxiety, fragility, and disenfranchisement in many G7 countries. The book was so well received that The Economist went so far as to publish two separate reviews because it 'is so important that it is worth looking again at some of its insights.'

Moreover, Prof Baldwin said that advanced communications technology has resulted in the possibility of providing brain services remotely. 'People from the advanced economies will have telepresence. People who work in banks do this. These people get the impression they are in the same room without traveling,' he said, adding that high skills would not shield people from the possibility of their jobs being offshored by telepresence. Instead, in five years, some jobs with skills that involve advanced pattern recognition can be done by artificial intelligence.

Prof Baldwin has authored numerous books and articles on a wide range of topics, including international trade, globalisation, regionalism, and European integration. He is the Professor of International Economics at the Graduate Institute, Geneva since 1991 and the President of the Centre for Economic Policy Research (CEPR), London since 2014.