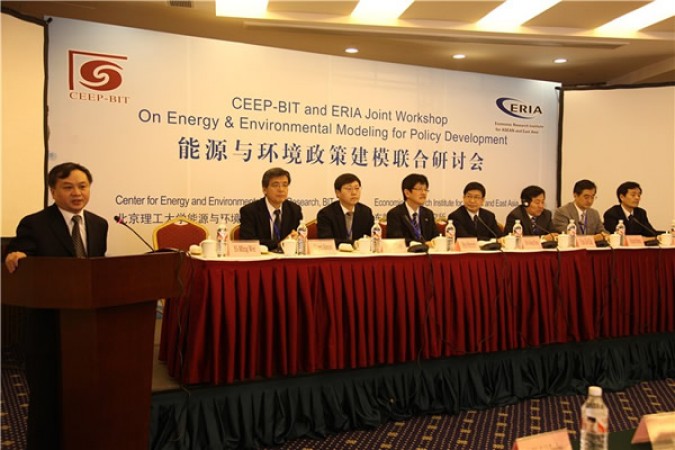 The "CEEP-BIT and ERIA Joint Workshop on Energy & Environmental Modeling for Policy Development" was hosted by Center for Energy and Environmental Policy Research, Beijing Institute of Technology (CEEP-BIT) and co-organized by the Economic Research Institute for ASEAN and East Asia (ERIA)

On 27 March 2012 at Friendship Hotel in Beijing, China around 200 participants attended the workshop, mainly from universities and research institutes of China. Members of ERIA's Working Group for Analysis on Energy Saving Potential in East Asia were also attending.

The objective of the workshop was to provide a chance for energy modelers from China and the EAS region to share information, knowledge and experience on energy modeling. Eight models of energy modeling were introduced by experts during the workshop. Those are namely: the Australian E4CAST Model, IEEJ's Model, Malaysia's Model and India's model, ERI (NDRC) model, CEEP (BIT) models, and a ZSG-DEA based resource allocation model. The participant also conducted a general discussion about energy and CO2 decomposition analysis.

As the result of the workshop, some points related to energy modeling were generated as follows:

a. Energy modeling was important but under-developed in many countries as a support to policy making.

b. Energy modelers need to have clear understanding on energy economic and engineering, which is necessary in justifying the modeling.

The workshop was designed to build the capacity towards model of energy, and thus a better support to policy making process. It highlighted that there exists a large potential for energy saving and conservation as well as the improvement of energy efficiency in many countries in the region. It thus suggested energy modelers to model the future trend of EEC precisely. It also called for development of regional energy and environmental models to support policy making for local governments. Through the workshop, participants also expressed its desire of continuing cooperation, nationally and internationally on developing energy modeling with supports of relevant institutes and ERIA in the future.