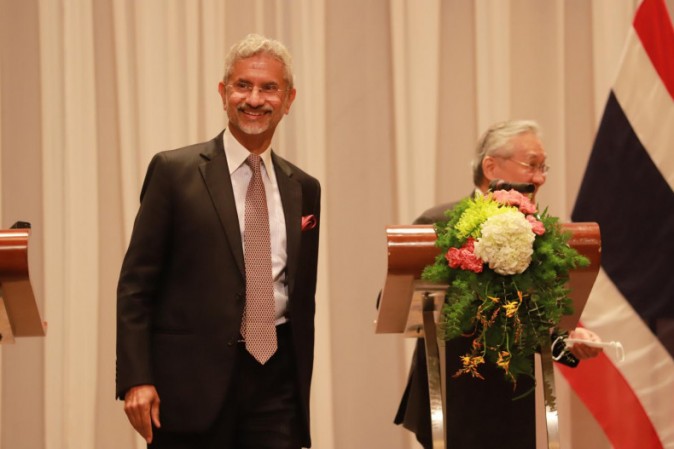 By Mr Kavi Chongkittavorn, Senior Communications Advisor: Thailand and India have taken seven-and-a-half decades to transform their close historical and cultural ties into a more strategic trajectory. It is not an easy task as their leaders have been all too comfortable with their longstanding friendly and relatively trouble-free ties. However, the recent three-day high-profile visit of Indian External Affairs Secretary Dr S Jaishankar has raised the dynamics of Thailand-India relations to a new level.

His Thailand trip came at a time when India has been demonstrating to the rest of the world its unwavering independent and neutral foreign policy. Thailand is on the same page as India. With the swiftly changing geopolitical landscape, Dr Jaishankar reiterated during meetings with his Thai counterpart that the two countries must do more together. In his speech at Chulalongkorn University, Dr Jaishankar was not shy talking about Thailand and its strategic potential, urging the country to think "in much more big-picture terms, keeping the long view in mind".

He also touched on Thailand's time-tested diplomatic finesse, citing the two countries' century-old efforts to protect their cultural identities and independence. As such, the two countries must work harder to create a multipolar Asia as its centre. "This will happen only if we Asian countries consolidate our independence and expand our freedom of choice," he pointed out, adding that Thailand, in many ways, has been an example in this respect, because it had navigated the most complex conflicts of the 20th Century.

Well said, Ajarn Jaishankar. Thailand has been doing that all along. The difference now is obvious and India will become a much closer strategic partner of Thailand. This will serve as a new template for their partnership in the coming decades.

All along, culture and religion have been the main links between the two nations. While these traditional ties will continue, more diversification in their cooperation is expected due to new opportunities that come with growing regional dynamism both in terms of economics and security. The Covid-19 pandemic has had some negative impacts, but it has also been a blessing in disguise because now they have both learned that they have the potential and capacity to forge cooperation in new areas, especially within the much-touted Indo-Pacific region.

At the recent Joint Commission for Bilateral Cooperation, Dr Jaishankar and his Thai counterpart Don Pramudwinai agreed to revitalise the all-round cooperation that was disrupted by the Covid-19 pandemic, and to boost mutual visits and dialogue. They also signed an MoU on Health and Medical Research cooperation and another one covering the Cooperation and Collaboration on Broadcasting between Prasar Bharati, India, and the Thai Public Broadcasting Service (Thai PBS). The two countries will also promote further exchanges in trading, tourism, joint security exercises, and training. Cyber security and ICT are two new areas that will be high on the agenda in the coming months. In addition, they also agreed to re-energise economic institutional mechanisms such as the setting up of a joint trade committee and business forums.

Thai investors should be encouraged to enter the Indian market. At the moment, only 38 Thai companies mainly in the fields of infrastructure, food processing and real estate, are present there. Stronger private sector engagement would increase understanding and appreciation of India's economic benefits. Lest we forget, as far as startups are concerned, India has a total of 105 unicorns.

India is Thailand's No.1 trading partner in South Asia with two-way trade volume last year amounting to US$15 billion, up from the US$12.46 billion peak in 2019 before the pandemic. Over the past five years, the tourism sector has witnessed a rapid surge of Indian visitors to Thailand. Back in 2016, only 1.04 million Indians chose Thailand as their destination. Three years later, the number had doubled to nearly 2 million, with more than 330 flights weekly between the two countries.

After Thailand opened its borders early this year, there has been a new phenomenon in the history of Thai tourism. Indian tourists topped all new international arrivals from January to June this year with a total of 294,000. This new trend has prompted Thai tourism strategists to think of new incentives to attract more Indian tourists.

Mr Don and Dr Jaishankar also highlighted the importance of the 1,400-kilometre trilateral highway connecting India, Myanmar and Thailand. which will link land transport between South Asia and Southeast Asia. It would also strengthen cooperation between the Asean members and South Asia. Unfortunately, this connectivity project has been delayed due to recent developments in Myanmar. Both sides agreed to promote additional sea and air connectivity.

As leading members of the Bay of Bengal Initiative for Multi-Sectorial Technical and Economic Cooperation (Bimstec), Thailand and India have committed to work closely to move the 25-year-old regional organisation forward. Strange as it may seem, when the idea was conceived in 1997, right after the Asian economic crisis, there was a high sense of déjà vu that Southeast Asia and South Asia would form a consolidated entity to further promote economic cooperation due to its large population and potential markets.

As the current chair, Thailand wants to rejuvenate Bimstec to promote prosperity, sustainability and openness to increase the bloc's overall leverage. With its rich marine and energy resources, closer cooperation would benefit all littoral members. Indeed, these are prerequisites to prepare the region to recover from the negative impacts caused by the pandemic. Therefore, it is imperative for Bimstec members to get their acts together, forge closer ties and improve economic integration and strength.

Given the current strategic competition among the great powers, in particular the ongoing US-China rivalry, the Bay of Bengal is currently perceived as a new battleground. In the Indo-Pacific era, Thai strategists view it as a newly contested sphere of influence for outside powers. The bay has 1.58 billion people and is an important shipping route linking the Indian and Pacific Oceans.

As Thailand and India are now willing to walk out of their comfort zones, their relations will never be the same again. From now on, what they need to do is to vigorously implement a plethora of cooperation deals at the individual, bilateral and collective levels.

Kavi Chongkittavorn is a veteran journalist on regional affairs.