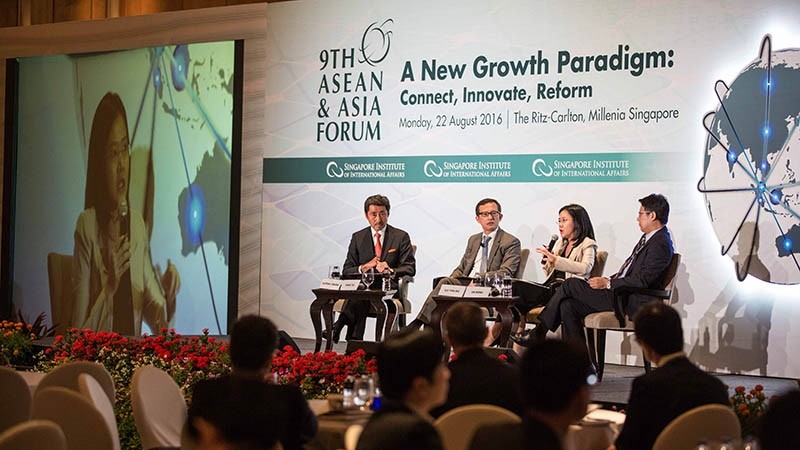 The Government of Indonesia is serious about attracting higher levels of investment into the country so that it can achieve high investment-led economic growth, said Dr Lili Yan Ing at the 9th ASEAN and Asia Forum.

The event was held by the Singapore Institute of International Affairs (SIIA) in collaboration with the Ministry of Trade and Industry of Singapore and ERIA on 22 August 2016 in Singapore.

Singapore's Minister for Trade and Industry, H.E. S Iswaran, delivered the opening remarks and Indonesia's Minister of National Development Planning, H.E. Bambang Brodjonegoro delivered the keynote speech outlining Indonesia's five year economic plan. The event was attended by around 250 potential investors and investment managers from across the region. Associate Professor Simon Tay, the Chairman of SIIA, moderated the panel in which Dr Ing spoke together with directors from UOB and Mitsui.

Dr Ing, who currently serves as a Senior Advisor on Trade and Investment to the President of Indonesia, focused her speech on promoting investment in Indonesia, especially in relation to Indonesian membership in ASEAN. There are two aspects of ASEAN that are crucial to understand. First, the establishment of the ASEAN Free Trade Area (AFTA) in 1992 enabled ASEAN to become a base of regional production networks in East Asia. Second, the construction of the ASEAN Trade in Goods Agreement (ATIGA) and the ASEAN Comprehensive Investment Agreement in 2009 provided guidelines on tariff elimination and moved forward ASEAN's agenda on trade and investment with its main trading partners.

Dr Ing highlighted two initiatives that show that Indonesia is serious about achieving an average of 5.3 percent investment-led economic growth in the next three years: namely infrastructure development and increased openness to foreign investment.

Infrastructure development is an area where the Government of Indonesia has shown intent and progress. Decades of under-investment and poor asset management have left Indonesia with a major infrastructure deficit. President Joko Widodo's administration is continuing its fiscal reform agenda, shifting budget allocation away from energy subsidies towards capital spending.

She emphasised that investment approval is also moving fast, as can be seen in several major developments and the reconstruction of existing infrastructure throughout the archipelago. Several projects currently underway are the first stage of New Priok port in Jakarta, Makassar-Parepare railway tracks in Sulawesi, water supply in Surabaya, as well as the development of terminals in Jakarta, Surabaya, Medan and other big cities.

The second initiative, which is a very good news for investors, is more openness to foreign investment. Dr Ing explained that while it is imperative for a big country like Indonesia to build basic industries such as steel, chemicals, and pharmaceuticals, Indonesia has markedly become more open in order to ensure quantity and quality of supply.

In the recent negative investment list which was released in April 2016, Indonesia further opened 45 business sectors to foreign investment, most notably in retail, tourism and creative economy, transportation, communication and IT, non-formal education, medicine, hospital management, and medical equipment. In addition, Indonesia opened up cement, airlines, and airport services up to 49 percent, 49 percent, and 67 percent respectively. Public works is now open up to 70 percent for ASEAN investors. Indonesia is now even opening up power construction and installation of high voltage of electric usage to 95 percent. Indonesia still maintains the banking sector open up to 99 percent which is among the highest level in the world, while the processing of fishery products and sugar are now open up to 100 percent.