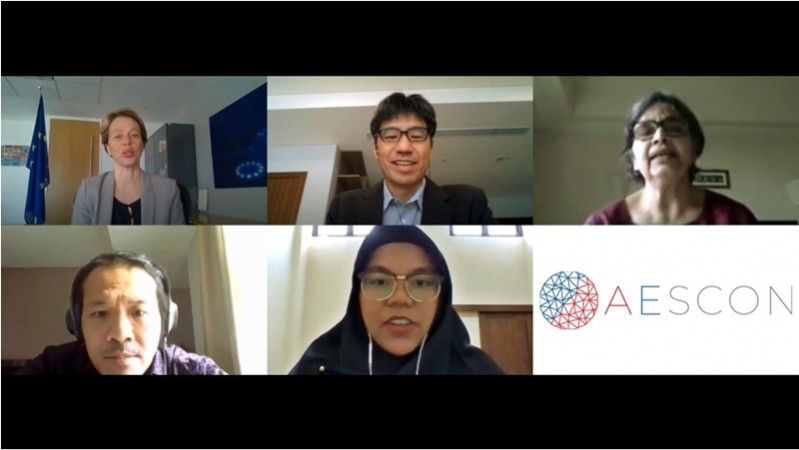 25 September 2020 – The Economic Research Institute for ASEAN and East Asia (ERIA) co-hosted this year’s Asia-Europe Sustainable Connectivity Scientific Conference (AESCON) in partnership with the Joint Research Centre, European Commission, the Asia-Europe Foundation, and and the Centre for China and Globalization (CCG). Due to the COVID-19 pandemic, the 2020 edition of AESCON was held virtually from 22-25 September 2020.

The event brought together researchers and policy analysts specializing in the fields of international connectivity, globalization, and sustainable development with a particular focus on the regions of Asia and Europe. AESCON aimed to serve as an academic forum to discuss the global challenges affecting today’s world such as transport infrastructure, energy transition, climate change, digital economy, trade and investment flows, security, and social mobility.

Chief Operating Officer of ERIA, Mr Koji Hachiyama, delivered opening remarks, emphasizing the importance for Asia and Europe to be ready to meet the challenges of tomorrow and the fourth industrial revolution.  In the context of Asia-Europe relations, Mr Hachiyama stated that ‘Asia and Europe represent sizeable parts of the global community since ASEM’s inception in 1996. Since then, the Asia-Europe Meeting has played a key role for dialogue and as a forum for connecting Asia and Europe.’ He also underscored ERIA’s continued support for strengthening Asia-Europe relations and connectivity as demonstrated by the regional think-tank’s research activities and event participation.

In her Keynote Address, Ambassador-at-Large for Connectivity at the European External Action Service, Romana Vlahutin, highlighted how the EU is the epitome of connectivity asserting that ‘connectivity is who we are, connectivity is our DNA.’ Furthermore, she added that the ‘European experience has taught us that one of the keys to success on connectivity is to follow some common sense rules so that connectivity benefits everyone equally and allows us to provide common responses to common challenges by developing common standards.’ In this regard, the EU’s longstanding experience in connectivity has resulted in fruitful results such as major economic growth thus Ambassador Vlahutin trusts that the bloc will be able to significantly contribute to overall global connectivity.

During the conference, ERIA’s Energy Economist Dr Alloysius Joko Purwanto and ERIA’s Research Associate Ms Ellen Putri Edita delivered their respective presentations based on the abstracts selected by the organizers. Both researchers’ presentations covered the main topic of transport connectivity which was part of AESCON’s Scientific Session 5 on 25 September 2020.

Dr Purwanto collaborated with Panayotis Christidis from the European Commission’s Joint Research Centre for their research on ‘Air Transport Connectivity between Asia and Europe’ offering recommendations on the future of flights between the two regions post-pandemic. The researchers outlined that while there is a range of common activities between Asia and Europe, the number of direct flight connections is limited with transit flights also primarily passing through the Gulf states or the Turkish region.

Dr Purwanto highlighted that the EU-ASEAN Comprehensive Air Travel Agreement (CATA) gives both regions the opportunity to ‘relaunch air transport demand between the EU and ASEAN’ by introducing more hub-to-hub operations. Asia and Europe would not only benefit from greater connectivity between two economically vital regions, but the materialization of CATA would push cooperation in joint marketing and revenue-sharing thus in turn, reducing travel costs. Such effects would shift the aviation market share from the Middle Eastern and Turkish regions in favour of Asia and Europe where there would be an increase in ASEAN and EU airlines’ share in the air transport market.

Ms Edita spoke on the topic of Aerotropolis based on her analysis of the social and environmental impact of the New Yogyakarta International Airport (NYIA) project in Indonesia. Based on the field research conducted by Ms Edita, it was revealed that the equal benefits that connectivity strives to bring had not been applied to Indonesia’s NYIA project. In fact, locals residing around the NYIA in Kulon Progo Regency suffered from displacement, relocation, poor compensation, and lost livelihoods and identity stemming from the Indonesian government’s effort at improving its connectivity with the world.

The research findings thus contradicted the intention of the NYIA project of achieving equal economic distribution throughout Indonesia by connecting more parts of the archipelago and accommodating to more flight passengers. As such, while Indonesia has yet to fully harness the equitable benefits of enhanced connectivity of its NYIA project, the problem it faces is demonstrative of what Amb Vlahutin mentioned in her speech that connectivity ‘brings massive opportunities, but also many challenges with it.’

Director of Policy Relations at ERIA, Ms Anita Prakash, coordinated ERIA’s partnership with the co-hosts of AESCON from Europe and Asia. She also presented her paper and spoke in the session on political connectivity. The main message of her presentation on 'Asia Europe Connectivity: Converging the Regulatory Standards and Sustainable Financing' was that connectivity plans must create trust among countries given that multilateral cooperation is needed for standards and regulations in connectivity plans. 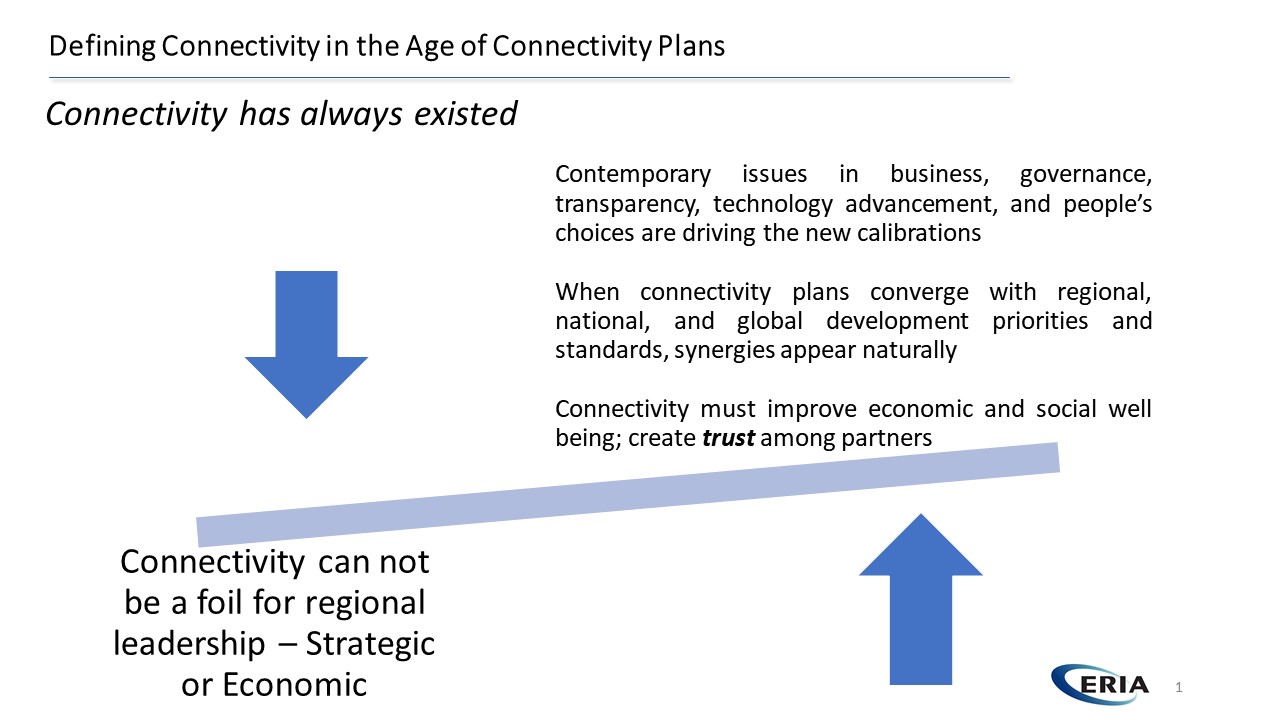 Speaking in the closing session of the AESCON, Ms Prakash summarised the spirit of the conference and said that the success of the AESCON was a triumph of the spirit of Asia-Europe connectivity. She concluded her speech by stating that the conference has overcome all the barriers induced by the pandemic, and brought Asia-Europe closer over four days, through a vibrant exchange of ideas and papers.

The videos and presentations of AESCON can be downloaded here https://www.aescon.org/downloads-videos/