A Bridge Too Far? Sceptical ruminations on the Transatlantic Trade and Investment Partnership (TTIP) 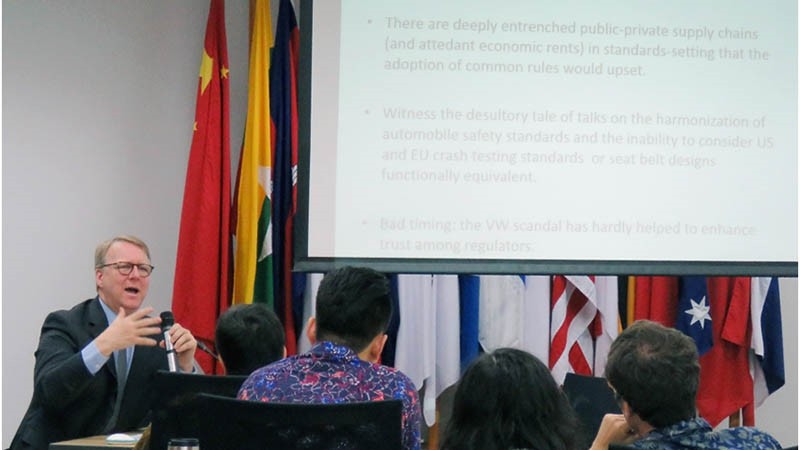 On 3 May 2016 ERIA co-hosted a seminar on the Transatlantic Trade and Investment Partnership which is arguably the most ambitious of the newer generation mega-regional constructs at play in contemporary economic diplomacy.

Dissecting the prospective agreement's underlying political economy, the presentation offered a critical assessment of the TTIP's chances of success, suggesting that a trade policy setting may be ill-suited both to the substantive objectives at play and the timetable within which such objectives are being pursued. For the presentation materials by the distinguished speaker Pierre Sauv�, please CLICK HERE.

Pierre Sauv� is Director of External Programmes and Academic Partnerships and faculty member at the World Trade Institute (WTI), University of Bern, Switzerland. He also holds many appoinments as faculty member or Visiting Professor in renowned universities, such as University of Barcelona, Institut d'Etudes Politiques Paris, London School of Economics and Political Science. Mr. Sauve worked closely with international institutions such as the OECD and was a staff in GATT Secretariat as well as the Bank for International Settlements in Switzerland. He has advised governments of a number of OECD and developing countries and served as a consultant to leading regional and multilateral agencies involved in trade, finance and development. Mr. Sauve serves on the editorial board of the Journal of International Economic Law and the Journal of World Trade. He currently serves on the Scientific Committee of the Swiss network for International Studies and on the Advisory Board of the WTO Academic Chairs programme. Mr. Sauv� was educated in economics and international relations at the Universit� du Qu�bec � Montreal and Carleton University in Canada, as well as at Cambridge and Oxford universities in the United Kingdom.

Lurong Chen is an Economist of Economic Research Institute for ASEAN and East Asia (ERIA). He obtained his Ph.D. degree in International Economics in the Graduate Institute, Geneva (HEID). Dr. Chen was a Research Fellow at the United Nations University before he joined ERIA. His research interests include international economics, Asian regionalism, GVCs and Production Sharing, Trade in Services, EU-Asia Relations, and Digital Economy. Dr. Chen actively publishes on international journals.