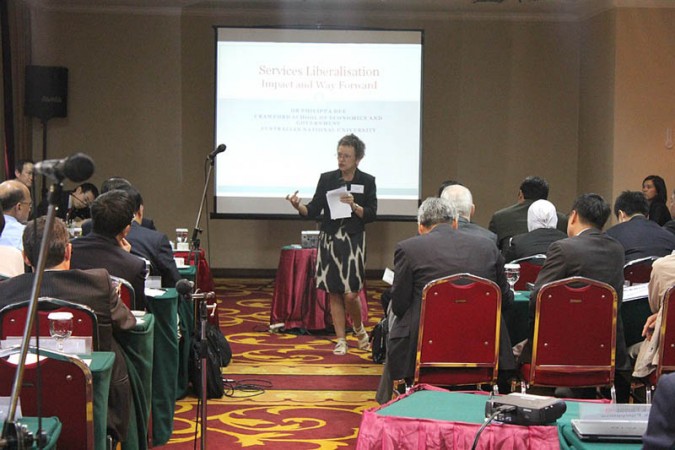 The three days Meeting which started on February 9th was attended by approximately 70 participants from the Research Institute Network (RIN), ASEAN Secretariat, ERIA's consultants, ERIA's researchers and the World Bank. The Meeting was organised and hosted by the Economic Research Institute for ASEAN and East Asia (ERIA) in Jakarta, Indonesia.

The AEC Blueprint MTR is one of the important undertakings mandated to ERIA to review performances, outcomes, impacts and ways forward of the AEC Blueprint. The Executive Director of ERIA, Mr. Hidetoshi Nishimura in his opening remarks on February 9th, underscored the importance of the AEC Blueprint MTR project mandated to ERIA by the ASEAN Leaders. He also stressed that ASEAN is turning into a critical moment for its future in achieving the ASEAN Integration 2015. Henceforth, ASEAN needs to consider also what lies "beyond 2015", he said.

The main objectives of the AEC Blueprint MTR project are to:

2)      Review the outcomes and impacts of the implementations

The AEC Blueprint MTR project receives special attentions from the Senior Economy Officials Meeting (SEOM). The findings of various studies undertaken under this project are expected to provide clear picture on the ASEAN Member State's readiness for the ASEAN Integration. The 2nd Technical Meeting aimed at discussing the preliminary findings from the country studies and the special studies on the AEC measures.

The Meeting was concluded by Dr. Fukunari Kimura, Chief Economist of ERIA on last Friday with joint commitment from all RIN Members and ERIA's consultants to complete the study by mid of March 2012. In his closing remarks, Dr. Kimura expressed his utmost appreciation to the ASEAN Secretariat, all RIN representatives, ERIA's consultants, ERIA's researchers and representatives from the World Bank who actively participated in the Meeting and provided inputs to the topics presented at the Meeting.