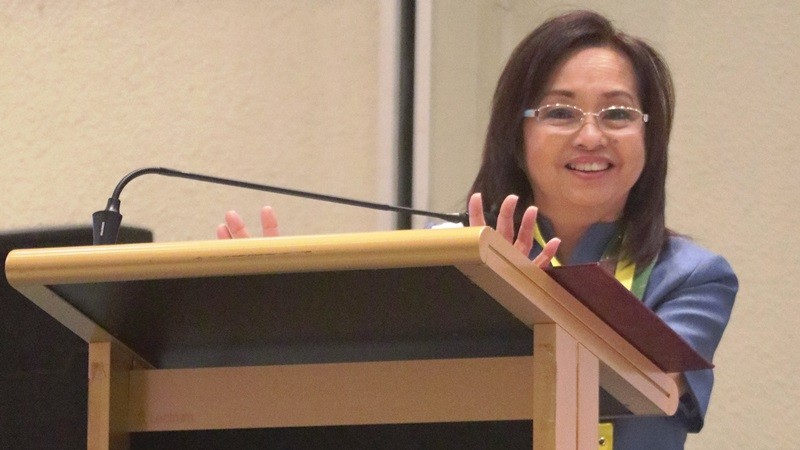 The Philippines holds the ASEAN Socio-cultural Community (ASCC) in high regards, as shown through its efforts to initiate the ASCC in 2003, its adoption of a summit theme related to ASCC during its chairmanship in 2007, and its implementation of 'building a people-oriented and people-centred ASEAN' as the first core priority of its 2017 chairmanship of ASEAN.

In her keynote speech in the Public Symposium on 'Building ASEAN Socio-Cultural Community and Nation Building' in Davao City, the Philippines, 24 August 2017, the Former President of the Philippines H.E. Dr Gloria Macapagal-Arroyo shared her experience as ASEAN Chair during her presidency, particularly about the ASEAN Socio-Cultural Community, and conveyed her appreciation for H.E. President Rodrigo Roa Duterte's chairmanship this year.

'ASEAN has had a vital 50 years of existence. As a President of the Philippines from 2001 to 2010, I had the privilege of being active in ASEAN for one period of those 50 years. And as our previous speakers have mentioned, during my time, in the October 2003 Summit in Bali, the Philippines had the honour of being the initiator of the ASEAN Socio-Cultural Community. In 2007, during my chairmanship of ASEAN, we followed through on our initiative with the summit theme of 'One Caring, Sharing Community',' said Former President Macapagal-Arroyo.

'And now, during the chairmanship of President Duterte, I am delighted that the first core priority he identified is 'building a People-oriented and People-centred ASEAN' and that is the essence and core priority of the ASEAN Socio-cultural Community.'

She stated that even though the ASEAN Summit held in January 2007 in Cebu was most memorable for the declaration to create an ASEAN Community in 2015 instead of 2020, it was very important for the Philippines because they wanted to have a declaration towards a 'One Caring, Sharing Community' in addition to the Cebu Declaration on the Protection and Promotion of the Rights of Migrant Workers.

Executive Director Zaldy Patron from the Office of ASEAN Affairs, Department of Foreign Affairs of the Philippines, shared the same sentiment with President Macapagal-Arroyo.

'ASCC, which the Philippines championed during the era of President Arroyo, is an important pillar of the ASEAN community along with the ASEAN Political-Security Community and the ASEAN Economic Community. It is the ASCC that gives more focus on the welfare of the people, the protection of the environment, and the importance of having our own ASEAN identity,' said Patron.

The symposium was jointly organised by the Economic Research Institute for ASEAN and East Asia (ERIA), in collaboration with the Philippine Institute for Development Studies (PIDS), Mindanao Development Authority (MinDA), and ASEAN Society Philippines, with the support from the Philippines' Department of Foreign Affairs - Philippine Mission to ASEAN. It was part of the commemorative events for the 50th Anniversary of ASEAN and it was the second of four public symposia that ERIA is hosting to commemorate the 50th anniversary of ASEAN. The first symposium, focused on the ASEAN Political-Security Community, was held in Iloilo in July. The third symposium, focused on the ASEAN Economic Community, will be held next month in Manila. The High Level Forum on [email protected], which is planned to be held in October in Manila, will conclude the series of commemorative events.