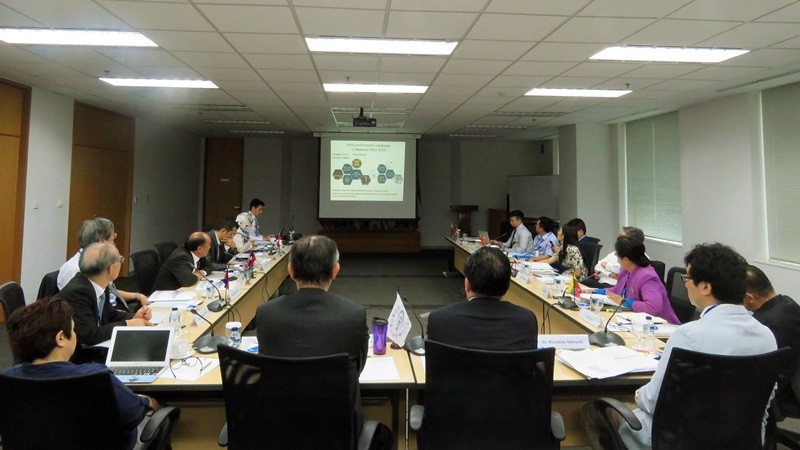 Prominent experts from the Association of Southeast Asian Nations’ (ASEAN) public sector as well as leading think tanks attended the workshop, which was led by ERIA’s Senior Policy Advisor, Mr Takafumi Fujisawa and ERIA’s Economist, Dr Masahito Ambashi. The participants also discussed issues surrounding infrastructure projects in every Southeast Asian country. The input and ideas provided during the event facilitates the completion of the CADP 3.0.

Since the initial launch of CADP 1.0 in 2010, it has become a highly-important and oft-referred document by ASEAN government leaders and industry experts. CADP 1.0 listed out the long-term strategy of improving ASEAN’s participation in international production networks which has evolved over the years. Released in 2015, CADP 2.0 identified 761 infrastructure projects believed to contribute to connectivity and innovation progress. CADP 3.0 is planned to be published in 2020 with the objective of achieving a higher level of ‘unbundling’, a term coined by Prof Richard Baldwin. ERIA’s Chief Economist, Prof Fukunari Kimura, issued a discussion paper on Baldwin’s concept in 2017.

Although ASEAN Member States are at different phases of their infrastructure development, workshop participants remain confident in enhancing their regional connectivity. The aim of such effort is to further push for industrialisation and economic growth in ASEAN. As of 2018, 56% of the infrastructure projects listed in CADP 2.0 have either been completed or nearing completion. This infrastructure advancement made by ASEAN between 2015-2018 indicated the region’s affirmation in creating a strong industry and achieving robust connectivity. Following on from the workshop, ERIA will soon begin accepting and selecting infrastructure project proposals by ASEAN Member-States due to be included in CADP 3.0.