ERIA, DRDF Release Longitudinal Study of Ageing and Health in the Philippines 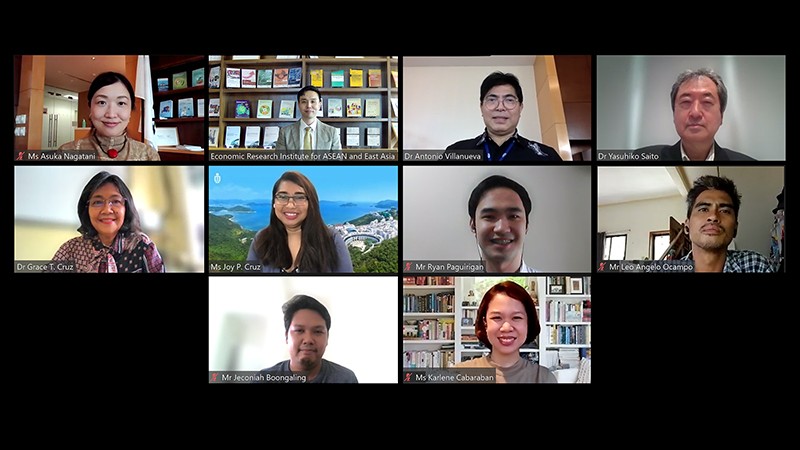 Jakarta, 7 July 2022: Baseline data on the health, economic status, and overall well-being of Filipinos age 60 years and above was released by the Economic Research Institute for ASEAN and East Asia (ERIA) and the Demographic Research and Development Foundation, Inc.  (DRDF) in a webinar held on 7 July 2022. The data, contained in the Longitudinal Study of Ageing and Health in the Philippines (LSAHP), is a valuable resource for crafting policies and has been used for practical ageing strategies in the Philippines.

The webinar, joined by more than 100 researchers, policymakers, NGO representatives, and students, disclosed data sets to the public for the first time.

In their opening remarks, Dr Takuma Kato, Director of the  Healthcare Unit of ERIA, and Dr Yasuhiko Saito, Senior Advisor to the President on Population Ageing of ERIA, noted the importance of using the data to accelerate the evidence-based policies from various perspectives, including closing the policy gaps between urban and rural areas and gender.  They said they were expecting a second survey in 2022 that will examine the post–COVID-19 pandemic impact on the elderly.

Dr Grace T. Cruz, Director of the University of the Philippines Population Institute, explained the LSAHP’s survey design, background, questionnaires, study samples, and main findings. She said that about 61% of respondents were living with their children, 57% were suffering from poverty, and income sources differed by gender. She said that age and gender differences exist in oral care and body mass index. She added that the LSAHP survey further revealed that due to financial problems, many older Filipinos have limited access to healthcare and know only a little about some available government health promotion services. She noted that at least one in six elderly Filipinos are at risk of severe COVID-19 infection because of their co-morbidities.  She cited ongoing research as sources of input to policies and government programmes.

During the Q&A session, moderated by Ms Christian Joy P. Cruz of DRDF, Dr Cruz was asked how the government reduces the healthcare gap between males and females. She answered that nutrition and income levels of the elderly are correlated, whilst noting that current health conditions have been formed over years of certain lifestyles. In considering health promotion strategies for the aged, she said, strategies must target the younger generations as well.

Asked how the government distributes its programmes to people of different social and cultural backgrounds, she pointed out the importance of clarifying the target of each policy and cited as an example raising the challenges of promoting discounts on medicines in the Philippines. She concluded that joint programmes amongst government units and multiple sectors are a necessary and effective way to implement policies.