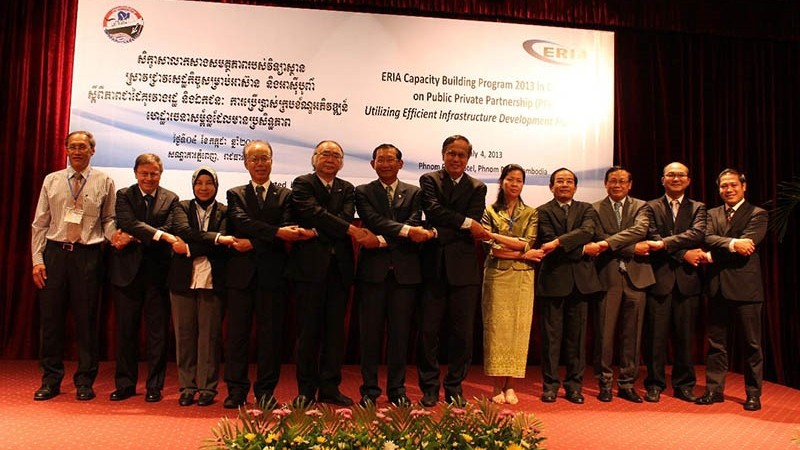 Phnom Penh, Cambodia, 4 July, 2013 - The Economic Research Institute for ASEAN and East Asia (ERIA) and the Ministry of Commerce of Kingdom of Cambodia jointly organized the Capacity Building Seminar on the topic of Public-Private Partnership (PPP) "Utilizing an Efficient Infrastructure Development Framework" on 4 July, 2013 in Phnom Penh in Cambodia

With the supports of the Cambodian Institute for Cooperation and Peace (CICP) and the Bangkok Research Center, IDE-JETRO, more than 150 local and international experts including government ministries, private companies, financiers, and legal practitioners explored potential opportunities and shared lessons focusing on Public Private Partnership (PPP).

"We acknowledge that we still lack capacity and financial resources to accelerate infrastructure development, thus private sector participation is crucial," H.E. Dr. Cham Prasidh, Senior Minister and Minister of Commerce of Kingdom of Cambodia said in his remarks, adding that "to do so, as well as to utilize regional resources for Cambodia's development, we should cooperate with regional counterparts in ASEAN." He stressed that PPP is the best remedy for solving problems in terms of infrastructure building for supporting economic and social growth.

He also mentioned that Cambodia has not embraced PPP scheme in the strict term. However, current practices in private sector participation in Cambodia have shown adoption of various PPP approach, particularly the use of Build Operate-Transfer or BOT structure. This is an important initiation to move further for more advanced concept and practices of PPP scheme.

At the end, the Minister commended the continuous supports and collaboration from ERIA, and expected further collaborations in the future.

Prof. Hidetoshi Nishimura, Executive Director of ERIA stressed the government, public sector should take maximum advantage of private sector's capability by seeking not only source of funding but also innovative solutions. "PPP is not necessarily a financing source. PPP is one of the effective procurement methods for infrastructure projects to develop robust and quality projects by making the best use of private companies' innovative ideas. Even in the case where host governments can afford to develop infrastructure projects by their own budget, PPP is still an effective option to deliver better infrastructure in the country".

The Seminar had six presentations, starting from Mr. Daniel J. Graham, Director, New South Wales Treasury, Australia. He shared his thought on "What is PPP? Why is PPP framework necessary?" "Don't start a process unless a strong political commitment, funding, and consistent approaches to let private sector understand where they are in process and who is doing what" he said.

He also recommended that stakeholders should focus on the establishment of a special PPP unit within the government which has sole negotiating power for concession projects. As a single point of contact between government and the private sector, the unit would also establish best practices, structure policy, provide guidance to project teams and decide on the risks that should be transferred to the party best capable of managing them.

Second presentation on "Trends and Overview of PPP Framework in ASEAN: Lessons from ASEAN Five Countries" was made by Dr. Fauziah Zen, Researcher, ERIA. She noted that there are some different situations among the ASEAN member countries--some countries in the ASEAN have too many and complicated regulations, while some still faced inadequate regulations and some countries lacked sufficient regulations.

She suggested that the main regulation should be at the proper level in the regulatory hierarchy of the respective country, since PPP involves cross sectors and institutions." She also stressed that "PPP regulations can be dynamic, but they should be kept straightforward and simple".

She also noted that there are a lot of financial resources to work on the infrastructure, but the main problems stemmed from lacks of legal certainty and shortage of investors friendly environment leading them not involved. H. E. Tes Rukhaphal, Deputy Secretary General, Economic, Social and Cultural Council (ECOSOCC), Office of the Council of Ministers, Cambodia , in his views toward a Public-Private Partnership (PPP) Framework in Infrastructure Projects in Cambodia, stated that the government has prioritized public investment in infrastructure.

He went on to say, "The private sector is the engine of economic growth in Cambodia. The Concept of 'free of charge' services no longer exists. Whatever goods and services are consumed, people have to pay for them." With an economic base, thus established, PPPs can represent a new flexible use of financial resources. PPP projects are playing an important role in socio-economic life in Cambodia.

The Seminar was closed by H.E. Pann Sorasak, Secretary of State of Ministry of Commerce, Kingdom of Cambodia. He emphasized that "The PPP system is not a copy and paste action. We cannot just copy what other countries have done assuming that it will also work successfully here. We have to start with recognizing our goals in adopting PPP. Next we assess our situation to identify which steps need to be taken, put them into the appropriate timeline, and do the actions to make them workable."

He also extended his expectation that ERIA would support Cambodia in designing applicable steps to successfully introduce PPP System in Cambodia.

In the end, ERIA looks forward to jointly organize the next capacity building seminar on Regional Comprehensive Economic Partnership (RCEP), Intellectual Property Rights (IPR), Competition Law, and Consumer Protection in October to support the vision of ASEAN and the East Asia Community.

The next PPP seminar will be conducted in Naypyitaw, Myanmar on July 24, 2013.