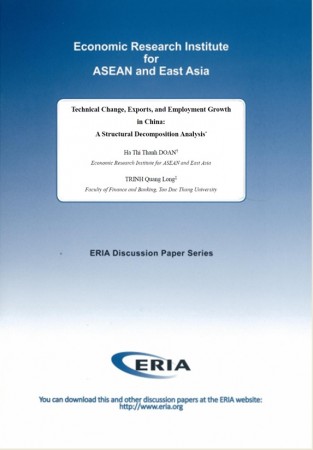 This paper analyses the sources of employment growth and assesses the contribution of exports to job creation in China. To do so, we utilise an input–output table to decompose employment growth into contributions from technical change, labour productivity, domestic final demand, and exports of domestically produced output. Our main data source is the annual input–output data from the China Industrial Productivity Database covering 1981–2010, of which employment figures have been adjusted to account for serious structural breaks observed in official statistics. The input–output framework allows us to explore both the direct impact of exports on employment within a given industry and the indirect impact through inter-industry transactions. Our major findings are fourfold. First, the increase in final demand, including both domestic demand and exports, is the main driver of employment growth in China. The strong growth in final demand offsets the decline in employment caused by enhanced labour productivity, especially during the 2000s. Second, the contribution of exports to job creation has increased significantly, especially in manufacturing and agriculture, following China’s accession to the World Trade Organization. Third, labour productivity accelerated in all sectors, led by manufacturing. Last, most technical upgrading occurs in manufacturing, while agriculture experiences increased technical upgrading through the decline in labour usage.