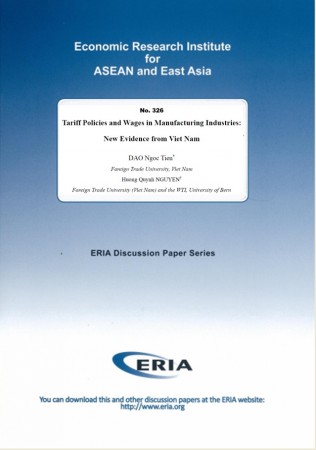 This paper reviews the tariff policies and their impact on the wages of workers in manufacturing during the substantial trade liberalisation period in Viet Nam from 2011 to 2015, the four years following Viet Nam becoming a middle-income country. The key results are as follows. At the industry level, decreasing trends of input tariffs the net effective rate of protection (ERP) are observed in accordance with the reduction in output tariffs. Positive ERP is only found in some manufacturing of final products, while negative ERP remains in several high-intensive technology industries. At the provincial level, higher ERP was found in provinces in the northern key economic zone in 2011, however the ERP of these provinces dropped in 2015. At the firm level, given the global trade modes of firms, the decrease in the ERP as well as the ITR and the NRP induces better earnings for workers in low-skilled, labour- intensive firms. This new evidence may suggest that in the era of new-generation free trade agreements in which negotiating for better market access for imported inputs is in focus, more attention should be paid to the ERP in technology-intensive industries and the better earnings of workers in high-skilled, labour-intensive firm. Additionally, the localised effects of tariff structures should be considered for regional development.