Resiliency of Production Networks in Asia: Evidence from the Asian Crisis 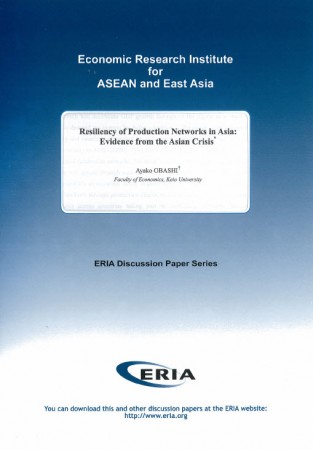 This paper presents the resiliency of international production networks stretched across the Asian region in face of the Asian financial and currency crisis back in 1997-98, as well as confirming its stability with consideration to adverse effects of the crisis. To examine the probability of survival once a trade relationship is established and the probability of revival after the transaction is broken off, survival analysis is conducted using the country-product level trade data. A series of survival analyses provide evidence supporting the view that transactions of intermediate goods within production networks are more likely to be stable and resilient to a temporary disruption compared to other transactions. First, even after considering the impact of the Asian crisis, machinery parts & components are more likely to be traded through long-lived trade relationships compared to finished products in intra-Asian trade. Second, machinery parts & components are no exception in that a non negligible portion of trade relationships was actually broken off amid the Asian crisis, but many of them were restored shortly afterward as compared to the others.