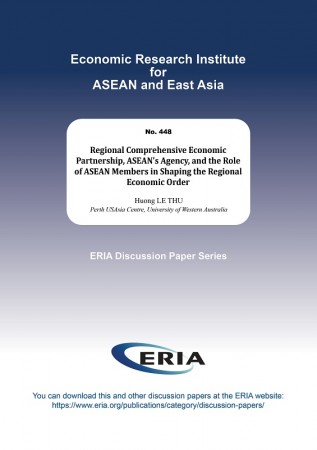 The Regional Comprehensive Economic Partnership (RCEP) – a mega free trade agreement comprising 15 countries – the 10 Association of Southeast Asian Nations (ASEAN) Member States and the dialogue partners (China, Japan, the Republic of Korea, Australia, and New Zealand) was finalised in November 2020. This paper looks at the process of the RCEP negotiations as an example of an ASEAN exercising agency. This paper also argues that RCEP asserts the agency of smaller powers within the trade network – ASEAN and its member states – particularly the more active role of individual members, including Viet Nam and Singapore amongst the most diplomatically supportive of the deal.

The circumstances under which RCEP came to life is not trivial. Under Viet Nam’s ASEAN chair in 2020, and amidst the global pandemic, RCEP was finalised. RCEP’s political and geo-economic significance arguably can overtake its economic role. In the time of great power competition where China becomes one of the key economic centres of the world, and the United States (US) competes with a vision of Indo-Pacific, the region’s middle and smaller powers are anxious about becoming ‘collateral damage’, particularly in the process of US–China ‘decoupling’. The ASEAN countries have emphasised the reluctance to ‘choose a side’. RCEP shows that they can show agency in carrying out trade liberalisation at the time when the global leader of the US in this field is missing. A mega-trade deal can be successfully led by smaller, and even developing, economies.