Machinery Trade in East Asia, and the Global Financial Crisis 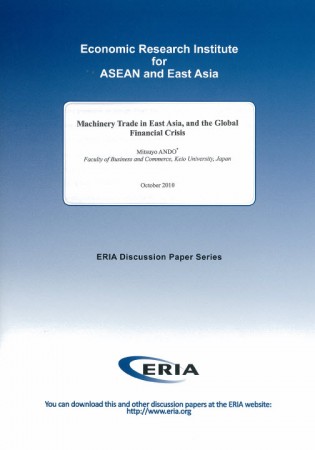 The global financial crisis since Q3 2008 has influenced the world economy, including that of East Asia. This paper focuses on international production/distribution networks, mainly observed in the machinery sectors in East Asia, and attempts to examine patterns of machinery trade movements during the crisis to explore how and to what extent it has affected trade. More specifically, the paper analyzes these trade patterns, with distinctions between machinery intermediate goods and machinery final products, among trading partners (regions), between intra-regional trade and inter-regional trade, and among machinery sectors, so as to investigate whether there were any differences in reactions to the crisis. Moreover, in order to consider possible seasonality in trade, the paper also attempts to apply the X-12 model and discusses features of trade patterns based not only on actual trade values but also on estimated trade values with seasonal adjustment.