Learning from the ASEAN+1 Model and the ACIA 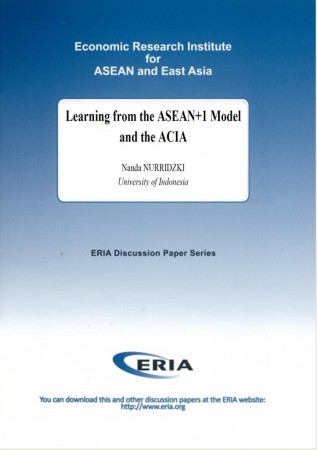 The Regional Comprehensive Economic Partnership (RCEP) is a new regional integration initiative intended to achieve a modern, comprehensive, high-quality, and mutually beneficial economic partnership agreement among the ASEAN Member States (AMSs) and ASEAN's FTA Partners. The RCEP initiative was announced by the ASEAN Leaders in November 2011 during the 19th ASEAN Summit. It is believed that this ASEAN-led process will enable ASEAN to broaden and deepen its economic engagements with its FTA partners. The RCEP will enhance access to a huge potential market, bringing benefits to both businesses and consumers in the participating countries. The agreement is between 16 countries, which make up 45 percent of world population and contribute a third of the world's GDP in total. The RCEP should lead to greater economic integration, support equitable economic development, and strengthen economic cooperation among the countries involved.

In general, RCEP can be seen as regional economic integration in East Asia on a higher level. It is assumed that RCEP will produce a commitment from AMSs and all partners (although there are several possible exceptions). Commitments from the partners are also expected to be in conjunction with the commitments made with individual AMSs. Additionally, the commitments made under RCEP are supposed to be substantially better compared to the existing ASEAN+1 commitment. This technical note aims to support RCEP through a key point analysis of the current ASEAN+1 FTA agreements. This analysis is expected to become an input for policy on the baseline for RCEP negotiation in the area of investment.

This technical note is composed of the following parts: 1) a narrative on the background, which is then followed by an account of the evolution of IGA, AIA, and ACIA; 2) a discussion on the progress of the ASEAN+1 FTA Agreements on Investments; and 3) the reservation lists in the ACIA. The note ends with a brief conclusion.