"Just Do Your Job": Obedience, Routine Tasks, and the Pattern of Specialization 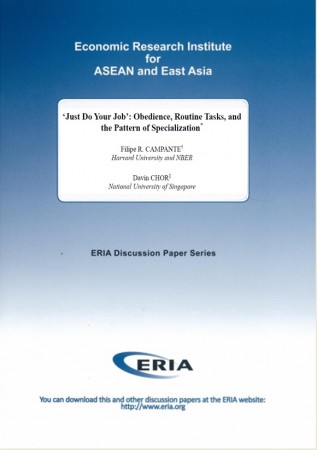 We study the interplay between cultural attitudes and the economic environment, focusing on attitudes towards obedience in the workplace. We establish two key stylized facts: First, at the country level, an upward shift in workplace obedience over time is associated with more exporting in industries that feature a high routine task content ('Specialization Fact'). Second, at the individual level, the degree of export-routineness" in the economic environment that respondents were exposed to in their formative years −but not in their adult years −shapes the pro-obedience attitudes that they carry with them into the workforce ('Obedience Fact'). Together, these two facts show that cultural attitudes on workplace obedience respond systematically to economic incentives, and that such a culture in turn shapes the subsequent pattern of industry specialization. We develop an overlapping generations model of human capital investment and cultural transmission, to understand how this aspect of culture and specialization patterns in the economy are jointly determined in the long run. In particular, the model demonstrates the possibility of an "obedience trap": countries may specialize in routine sectors (e.g., basic manufacturing) that foster a culture of obedience, at the expense of the development of more nonroutine and potentially more productive activities.