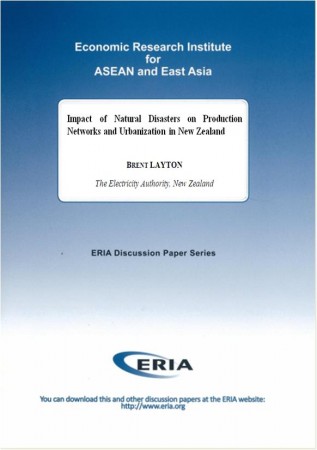 New Zealand's history of natural disasters and its vulnerability to various types of disaster are outlined briefly. A summary description of the country's arrangements for preparing for natural disasters and managing the response to, and recovery from, them is provided.
The series of earthquakes that affected Christchurch, New Zealand's second largest city, between September 2010 and early 2012 is considered as a case study. The direct and indirect tangible costs of the events are estimated as $NZ 30.9 billion (approximately $US24.5billion), or 15.8% of the country's GDP, on a replacement cost basis. Approximately 78% of this cost will be covered by insurance. On a depreciated replacement cost basis the damage is estimated at $NZ18.7 billion.
The significant effects of the events on the population, labor market, reported crime, urbanization and location of businesses and production of the region are also described.
The case study suggests that New Zealand's arrangements for natural disasters worked well in most regards. The case study also highlights the advantage of international co-operation in the response to natural disasters. It also suggests that while high rates and levels of disaster insurance ameliorate the financial impact, they can complicate achieving effective recovery. This is because insurance funds increase the alternatives available to the affected population and investors in respect of reinvestment and rebuilding the damaged region. The lag before insurers will accept new risks can also create delays and impede the momentum to recovery.
The final section of the paper draws from New Zealand's recent disaster experience in Christchurch to present some policy recommendations relevant to New Zealand and the East Asia region.