Impact of Natural Disasters on Agriculture, Food Security, and Natural Resources and Environment in the Philippines 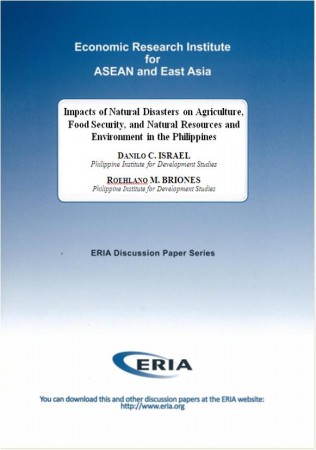 This study quantitatively and qualitatively analyzed the impacts of natural disasters (particularly typhoons, floods and droughts) on agriculture, food security and the natural resources and environment in the Philippines. It aimed to propose recommendations as to how best to respond to the impacts of natural disasters and to suggest further studies that can be undertaken. In general, the study found that: a) typhoons, floods and droughts have an insignificant impact on overall agricultural production at the national level, yet typhoons may have a significant negative impact on paddy rice production at the provincial level; b) typhoons, as exemplified by Ondoy and Pepeng in 2009, have a significant negative impact on the food security of the households in the affected areas; c) households have varying consumption and non-consumption strategies to cope with the impacts of typhoons; and d) the different impacts of typhoons, floods and droughts on the natural resources and environment have not been quantitatively assessed in detail, however available evidence suggests that these are also substantial. Based on its results and findings, the study recommends the following: a) Since typhoons may have significant negative impacts on rice production at the local level as opposed to the national level, assistance for rice farmers and the agriculture sector as a whole should be made more site-specific, zeroing in on the affected areas that actually need it; b) Those assisting affected households and areas in overcoming the resulting ill-effects of natural disasters should consider not only consumption strategies, such as the provision of emergency food aid, but also non-consumption strategies, such as the provision of post-disaster emergency employment; and c) While the available evidence suggests that the natural resources and environment sector is significantly affected by natural disasters, it is currently less considered, as attention is presently focused on agriculture. It may now be high time to provide concrete assistance to this sector, in particular the provision of defensive investments and rehabilitation expenditures to cope with these natural disasters.