Impact of Free Trade Agreements on Trade in East Asia 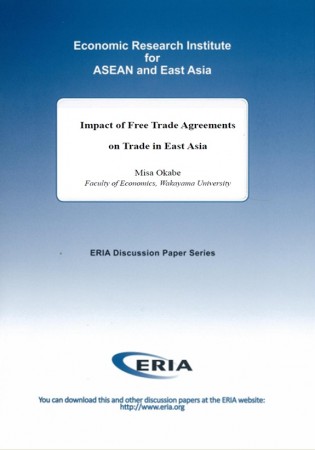 The number of bilateral and plurilateral free trade agreements (FTAs) in East Asia has increased rapidly after the 2000s behind the world trend of RTAs. Many studies tackled the challenge of figuring out the impact of FTAs in this region by applying various methodologies. The first half of this paper reviews empirical studies of ex-post evaluation of FTAs in East Asia. A look at earlier studies on the impact of the ASEAN Free Trade Area (hereafter AFTA), the first regional FTA in this region revealed that few studies found robust trade creation effects of AFTA in the 1990s. However, since the 2000s, several studies using detailed trade and tariff data on products or sectors indicate that tariff elimination under AFTA promoted regional trade among ASEAN countries. Recent studies also show tariff elimination is not necessarily the most important measure to promote trade in goods in the case of AFTA. Liberalisation measures--such as reduction of non-tariff measures, trade facilitation and coordination of rules of origin, and improvement of FTA usability--are more important measures to facilitate trade between members other than tariff elimination. Likewise, with regard to bilateral FTAs in East Asia, some ex-post evaluation studies show that these FTAs positively impact trade at some extent. These studies show that the positive impacts are brought not only by tariff elimination under the FTAs but also by other liberalisation measures. The latter half of this paper discusses a basic empirical analysis on the impact of five ASEAN+1 FTAs which have not yet been sufficiently investigated because of shortage of data. We found that trade creation effects of ASEAN-China FTA (ACFTA) and ASEAN-Korea FTA (AKFTA) appear in industrial supplies and capital goods between members. Also, trade in consumption goods is facilitated under ACFTA. On the other hand, the impact of ASEAN-Japan FTA (AJCEP) is not revealed in many cases. These results suggest that these regional FTAs potentiate the positive impact on trade when production and sales networks among members have already been developed. At the same time, the newer FTAs whose members are the same as precedent FTAs should set tariff elimination and other liberalisation measures at more liberalised level than precedent FTAs. From the perspective of effectiveness, the newer regional FTA in this region, such as the Regional Comprehensive Economic Partnership, needs to have a higher level of liberalisation and more inexpensive procedures for members to utilize said FTA than the existing ASEAN+1 FTAs in this region.