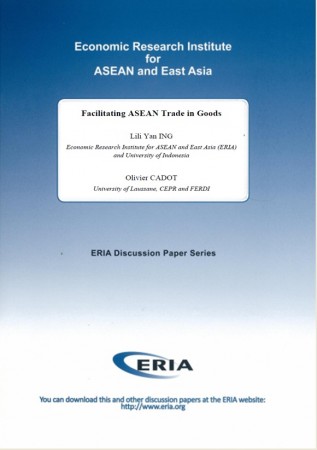 Trade facilitation should be viewed as a strategic issue rather than a technical one. While ASEAN has been successful in the phasing out of intra-regional tariffs, ASEAN's trade facilitation is not just about reducing cross-border transaction costs but also focusing on (i) rules of origin (RoOs), (ii) NTM (non-tariff measure) transparency, and (iii) NTM streamlining. The RoOs in the ASEAN Trade in Goods Agreement (ATIGA) have a relatively simple structure of which about 40 percent consists of RVC-40 or CTH. In spite of their apparent simplicity, ATIGA's RoOs seem to have substantial trade-inhibiting effects, with recent research putting their ad valorem equivalent at about 3.40 percent. In the case of NTMs, the costs imposed by NTMs on businesses are of three sorts: enforcement, sourcing, and process adaptation. The most important thing lies in the transparency of NTMs which rests on two pillars: accurate data, and open dissemination and dynamic disciplines. The underlying notion is that NTM streamlining should not be viewed as a trade-negotiation issue because NTMs are not pure trade policy instruments. Thus, what we propose is to take it back to the country level and promote the creation of an economic council with a mandate to review and improve key business-relevant regulations.