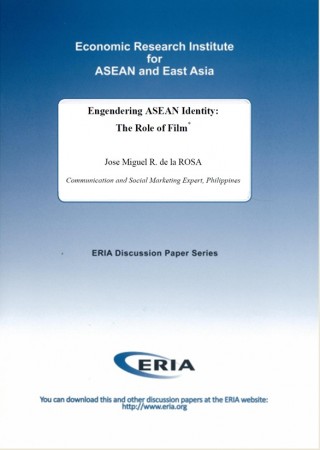 The role of film, which is used here in generic terms to include audiovisual images as well as animation, in engendering the much-sought after Association of Southeast Asian Nations (ASEAN) identity is a necessary ingredient in the general framework of development leading to the realisation of the ASEAN Community. Film is an economic tool as it brings unquantifiable benefits to sectors participating in the industry. It is an effective information mechanism translating messages in more meaningful ways that appeal to the emotions. Film mirrors the cultural lives of people and reflects their heritage, values, and traditions. With the advancement in technology, film now comes in different platforms and formats, and is not confined to cinema or theatre. It becomes accessible through personal gadgets, the Internet, television (TV), cable TV, and digital versatile discs (DVDs). Thus, the reach and influence of films are vital in the people-oriented and people-centred agenda of an identity search and ensure that stakeholders down to the community level in all ASEAN member states (AMS) benefit from this approach.

The ASEAN Socio-Cultural Community (ASCC) Blueprint clearly identifies the goals and strategies that AMS should support through the multilevel mechanisms in the Committee on Culture and Information (COCI), the Senior Officials Meeting Responsible for Information (SOMRI), and the ASEAN Ministers Responsible for Information (AMRI). This set of goals and strategies can be facilitated and implemented by collectively engaging government agencies in charge of film development in the AMS under the management of a technical expert group for this area and referred to as FILM ASEAN. While the COCI, SOMRI, and AMRI can provide the official conduit for the government's participation in film development, FILM ASEAN as presented in this paper is worth taking a look at. There may also be a need to re-think the assignment of officers to the Working Group on Content and Production formed by the SOMRI to attend to the business of film development. Representation of the FILM ASEAN in the said Working Group may be an immediate action that can be taken for this purpose. Other initiatives related to global connection for film production and co-production may also be assigned to FILM ASEAN as it is already engaged in this endeavour.