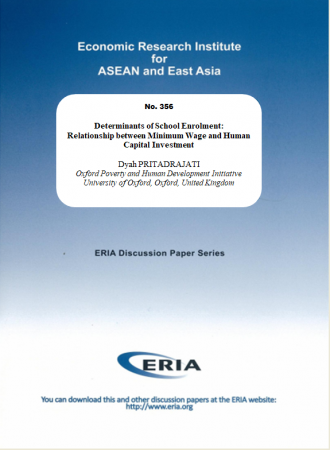 Most economic research on minimum wage has focused on employment eﬀects. Research analysing the eﬀects of minimum wage on skill acquisition and educational investment is limited, especially in developing countries. To fill the gap in the literature, this paper investigates the relationship of minimum wage and human capital investment using the National Socioeconomic Survey (Susenas). This study is an eﬀort to further analyse whether the minimum wage policy supports or even hinders recent government eﬀorts to keep students in school. The government may be unaware of the possible interaction of diﬀerent policies, especially in a developing country where inter-sectoral policy coordination is limited. This paper finds that minimum wage legislation has significant negative substitution eﬀect on educational investment, i.e. individuals are more likely to drop out of senior secondary school due to an increase in minimum wage. There is no evidence of gender bias in human capital investment, at least as a response to increasing minimum wage. Even though the response to an increase in minimum wage amongst low-income households is positive, the results of a regression incorporating an interaction term suggest that the substitution eﬀect is the dominant factor. Therefore, the positive result amongst low-income households might be generated by a fall in the probability of obtaining low-skilled employment that oﬀsets the substitution eﬀect.