Centrality and Community: ASEAN in the Regional Comprehensive Economic Partnership 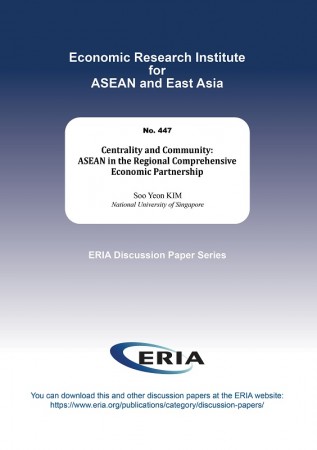 This paper examines the Association of Southeast Asian Nations’ (ASEAN) role in the formation of the Regional Comprehensive Economic Partnership (RCEP) agreement. The RCEP project proceeded as trade governance has shifted from the multilateral trade regime under the World Trade Organization to free trade agreements and where the geopolitics of Asia has cast a shadow on the progress of regional integration efforts. The analysis in this paper focuses on ASEAN centrality, both as a concept and practice, in influencing the launch and progress of RCEP. Conceptually, ASEAN centrality is about the capacity of the 10-member group to help launch negotiations for the RCEP agreement and to shape its provisions for governing trade. In practice, the RCEP agreement consolidates and significantly unravels the numerous overlapping trade agreements between ASEAN, 38 in all between individual ASEAN members and its five RCEP partners, Australia, China, Japan, the Republic of Korea, and New Zealand. The paper also examines the relationship between the ASEAN Economic Community (AEC) and RCEP. RCEP provides for further tariff liberalisation between ASEAN members and its five RCEP partners and thus expands the zone of preferential treatment for goods exported from ASEAN and other RCEP members. RCEP also consolidates rules of origin requirements under one agreement, providing for diagonal cumulation and common rules of cumulation for agreement partners. The RCEP provisions can greatly facilitate production and trade along regional supply chains, thus accelerating the progress of the AEC as a single market and production base. Moving forwards, RCEP and ASEAN’s place in it, is likely to be shaped by challenges and opportunities from the Comprehensive and Progressive Transpacific Partnership and the Biden administration’s Indo-Pacific Economic Framework (IPEF) initiative. The ASEAN members with overlapping membership in the IPEF and RCEP will be pivotal in determining areas of cooperation. Regional integration will thus continue to be shaped by ASEAN centrality, and its progress will shape the ASEAN community.

Centrality and Community:  ASEAN in the Regional Comprehensive  Economic Partnership