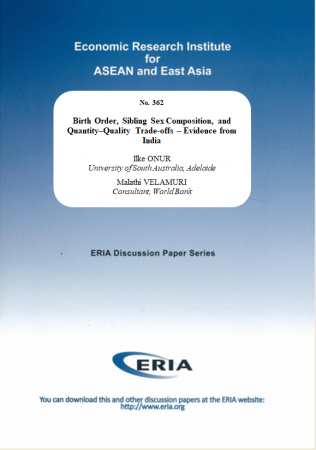 We use two waves of data from the India Human Development Survey to investigate the effect of family size on (i) parental expenditures on children’s education; and (ii) test scores of proficiency in reading, writing, and maths for 8–11-year-old children. We investigate whether these effects vary by gender, birth order of children, and sibling sex composition. We address the endogeneity of family size, using an instrumental variable approach. Our ordinary least squares estimates provide evidence of quantity–quality trade-offs in children’s educational expenditures, the existence of birth-order effects, and a sizeable pro-son bias. For test scores as well, ordinary least squares estimates indicate negative spillovers from additional children. The instrumental variable estimates, in contrast, find no evidence of quantity–quality trade-offs, birth order, or sibling sex composition effects in either expenditures or test scores. However, instrumental variable estimates of the male premium are bigger than ordinary least squares estimates. They also suggest that children enrolled in private schools do no better than those in government schools. Moreover, the advantage that boys appear to have over girls in maths is largely reversed in private schools.