ASEAN in the Global Economy- An Enhanced Economic and Political Role 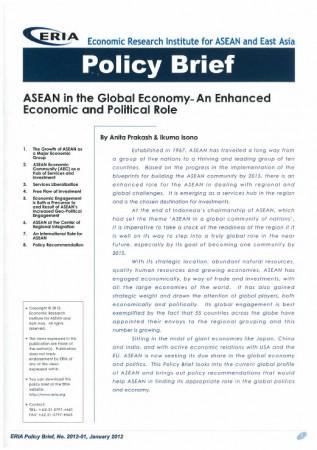 Established in 1967, ASEAN has travelled a long way from a group of five nations to a thriving and leading group of ten countries. Based on the progress in the implementation of the blueprints for building the ASEAN community by 2015, there is an enhanced role for the ASEAN in dealing with regional and global challenges. It is emerging as a services hub in the region and is the chosen destination for investments.
At the end of Indonesia's chairmanship of ASEAN, which had set the theme 'ASEAN in a global community of nations', it is imperative to take a stock of the readiness of the region if it is well on its way to step into a truly global role in the near future, especially by its goal of becoming one community by 2015. With its strategic location, abundant natural resources, quality human resources and growing economies, ASEAN has engaged economically, by way of trade and investments, with all the large economies of the world. It has also gained strategic weight and drawn the attention of global players, both economically and politically. Its global engagement is best exemplified by the fact that 55 countries across the globe have appointed their envoys to the regional grouping and this number is growing.
Sitting in the midst of giant economies like Japan, China and India, and with active economic relations with USA and the EU, ASEAN is now seeking its due share in the global economy and politics. This Policy Brief looks into the current global profile of ASEAN and brings out policy recommendations that would help ASEAN in finding its appropriate role in the global politics and economy.