ASEAN as an FDI Attractor:
How Do Multinationals Look at ASEAN? 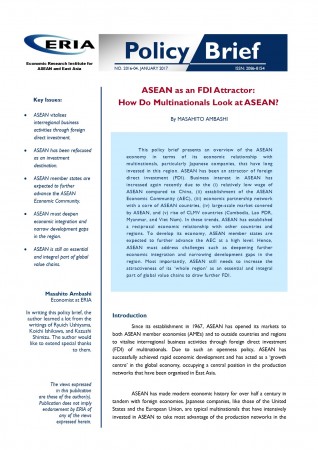 This policy brief presents an overview of the ASEAN economy in terms of its economic relationship with multinationals, particularly Japanese companies, that have long invested in this region. ASEAN has been an attractor of foreign direct investment (FDI). Business interest in ASEAN has increased again recently due to the (i) relatively low wage of ASEAN compared to China, (ii) establishment of the ASEAN Economic Community (AEC), (iii) economic partnership network with a core of ASEAN countries, (iv) large-scale market covered by ASEAN, and (v) rise of CLMV countries (Cambodia, Lao PDR, Myanmar, and Viet Nam). In these trends, ASEAN has established a reciprocal economic relationship with other countries and regions. To develop its economy, ASEAN member states are expected to further advance the AEC at a high level. Hence, ASEAN must address challenges such as deepening further economic integration and narrowing development gaps in the region. Most importantly, ASEAN still needs to increase the attractiveness of its 'whole region' as an essential and integral part of global value chains to draw further FDI.