Analysis on Price Elasticity of Energy Demand in East Asia: Empirical Evidence and Policy Implications for ASEAN and East Asia 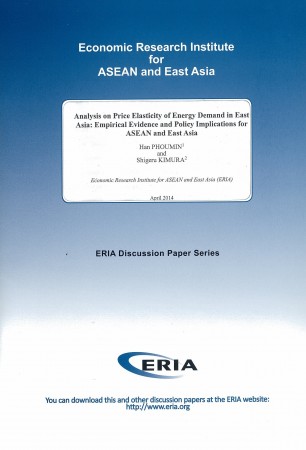 This study uses time series data of selected ASEAN and East Asia countries to investigate the patterns of price and income elasticity of energy demand. Applying a dynamic log-linear energy demand model, both short-run and long-run price and income elasticities were estimated by country. The study uses three types of dependent variable "energy demand" such as total primary energy consumption (TPES), total final energy consumption (TFEC) and total final oil consumption (TFOC) to regress on its determinants such as energy price and income. The finding shows that price elasticity is generally inelastic amongst all countries of studies. These findings support to the theory of price inelasticity of energy demand due to the assumption that energy remains a special commodity due to its nature of lack of substitution. Any shift from oil to other energy is difficult as it depends on equipment uses which are not easily to be replaced. As a result, a unit change in price may not induce equal change in quantity of demand. Although prices are inelastic, this study observed that price elasticity in developing counties is more sensitive than in developed countries. Among the countries studied, Thailand, Singapore and the Philippines have shown to be price sensitive compared to other developing countries and developed countries. For the income elasticity, this study also found that income has been very sensitive towards energy consumption, except for countries like India, China and Australia due to energy supply limitation in the cases of India and China and to less energy intensive industrial structure in the case of Australia. The price elasticity by energy type shows that TPES has a smaller impact than TFEC and TFOC, and TFEC is smaller than TFOC in terms of sensitivity of the price elasticity. Amongst other reasons, fuel subsidies may play roles in the insensitivity of energy prices. The findings have policy implications as inelastic price will impact on the uptake of energy efficiency in developing as well as developed countries. Therefore, removal of energy subsidies, albeit done in a gradual manner, will be critical to the promotion of energy efficiency. Its impact likewise goes further in that it will benefit the Renewable Energy uptake, the environment and social benefits.