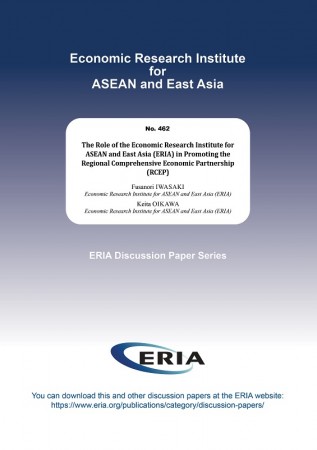 This paper aims to understand how the Economic Research Institute for ASEAN and East Asia (ERIA), an international organisation established under the East Asia Summit framework in 2008, contributed to negotiations for the Regional Comprehensive Economic Partnership (RCEP) agreement. Previous international relations studies have analysed the functions of international institutions, such as providing specialist information, skills, and knowledge, and helping states with international policymaking. In light of the functions of international institutions that the previous studies identified, we examine ERIA’s activities in support of the RCEP and their changing characteristics at each phase of the negotiating process: (i) before the launch of negotiations, (ii) during the early stage of negotiations, (iii) during the later stage of negotiations, and (iv) during the implementation phase after conclusion of the agreement. We show that ERIA studied the economic impact and feasibility of implementing the RCEP in the 16 countries participating in the RCEP negotiations before the negotiation launch phase, providing a rationale for establishing the RCEP. In the early stage of negotiations, ERIA promoted ASEAN centrality, which is the key concept of the RCEP negotiations, through research asserting the importance of the ASEAN Economic Community (AEC) and the significance of the RCEP in realising the AEC. In the later stage of negotiations, ERIA expanded its scope of contribution to include more policy-oriented engagement with policymakers in the countries participating in the RCEP negotiations, exemplified by the establishment of ERIA’s Policy Design Department in 2016. The Policy Design Department provided technical support for preparing rules of origin and trade facilitation negative lists through capacity building programmes for RCEP negotiators in Cambodia and the Lao PDR. Even after the end of the RCEP negotiations, ERIA conducted capacity development programmes on RCEP issues in various fields (harmonised tariff nomenclature, rules of origin, and e-commerce). Throughout the four phases of the RCEP negotiating process, ERIA provided information-providing and decision-supporting functions. In line with the need for finalizing and implementing the RCEP, ERIA expanded its mission to include the specialist technical-providing function in the last phases.