The Impact of the US Subprime Mortgage Crisis on the World and East Asia:Through Analyses of Cross-border Capital Movements 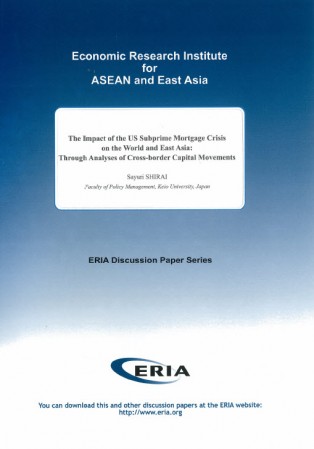 The world economy is currently suffering a global financial and economic crisis that has become severe since the second half of 2008. This global financial situation was triggered by the advent of the subprime mortgage crisis in the United States that became apparent in mid-2007. Europe was the first area affected, thereafter its contagion spread to the rest of the world. East Asia did not escape. The nature of the current global financial crisis is unprecedented in terms of (1) the scale of the problems in the financial sector (particularly in the United States and Europe), (2) the depth and speed of contagion worldwide (through financial sector and trade linkages), and (3) the severity of the recession (particularly in emerging market economics, small countries, and East Asia). This paper analyzes, mainly, cross-border capital movements by looking at the pre-crisis features of the United States as the crisis hypocenter and its relationships with other countries. Detailed observations are presented on cross-border investment in stocks and debt securities, as well as banking activities. The paper then sheds light on the impact of the subprime mortgage crisis on cross-border capital movements in the United States, the United Kingdom, and East Asia. Other performance indicators such as exchange rates, economic growth and international trade are also discussed in the case of East Asia. The paper examines several challenges posed for East Asia by the crisis.