The Economic Impact of Globalisation in Indonesia 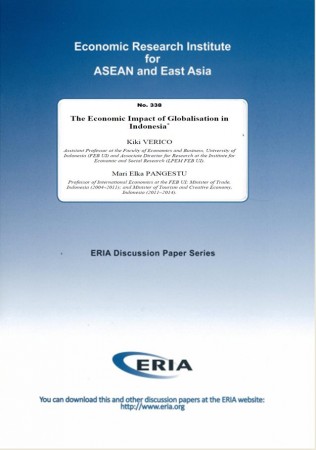 This paper analyses the economic impact of globalisation in Indonesia from the end of the 1960s to date. The analysis found that globalisation generated a positive impact on Indonesia’s economic growth through the trade and investment channel; reduced wage inequality and child labour participation; and increased labour absorption, including women's participation in the labour market. Through the trade channel, globalisation also contributed to Indonesia’s productivity and structural economic transformation, benefited small and medium-sized enterprises (SMEs), contributed to poverty alleviation and reduced inequality, and increased trade in services such as tourism. Through the investment channel, there is evidence of the spillover effect of technology transfer, technology progress, improvement of the role of SMEs, and contribution to poverty alleviation. The waves of open and more restrictive trade and investment policies, which Indonesia has gone through in the last few decades, reflect the political economy reality – that is, the impact of globalisation is dynamic and only felt in the medium term, whereas the cost and potential negative impact is often felt more immediately throughout trade creation. The trade creation increases imports from countries with which free trade agreements have been negotiated, decreasing the domestic producer surplus. Since globalisation will create net benefits in the long run, Indonesia should continue its process of globalisation and integration with the world economy to ensure the net benefits and to move forward in its structural transformation, while managing the costs of globalisation and its transition process.

The Economic Impact of Globalisation in Indonesia

Economic Consequences of Globalisation: The Australian Framework for Reforms

Economic Consequences of Trade and Investment Liberalisation: The Case of Viet Nam

The Impact of Economy Globalisation Firm Performance and the Labour Market: Evidence from Japan

The Economic Consequences of Globalisation in the United States