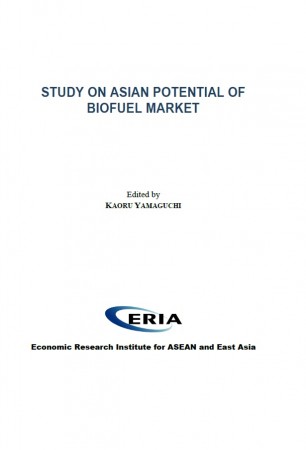 With a growing population, rising income levels, and expanding urbanisation, Asia's demand for oil is expected to increase rapidly. However, due to limited resource reserves, most of the countries in the region are heavily dependent on imports for their oil supply, which is a major, if not the most critical, concern in their energy policies. Though it has been debated intensively, biofuel is perceived as one possible option to address the oil security issue, since expanding the use of biofuels will not only result in reducing demand for oil, but will also contribute to the diversification of import sources for liquid fuels. Moreover, biofuel production also provides an additional way to increase the income of farmers.

This study focused on the Asian potential on the two types of biofuel--bioethanol and biodiesel. The objectives are to find the methods and policies for promoting the sustainable use of biofuels. The study is endorsed and supported by the Economic Research Institute for ASEAN and East Asia (ERIA), with a Working Group (WG) set up to oversee and coordinate the study. The WG is composed of biofuel policymakers from Indonesia, Malaysia, the Philippines, and Thailand; and researchers from The Institute of Energy Economics, Japan (IEEJ), who conducted the study and prepared the study report.

The study was conducted through three phases. The first phase focused on the biofuel development status and future biofuel demand and supply possibilities in four WG member countries--Indonesia, Malaysia, the Philippines, and Thailand. The second phase expanded the scope of the study to 16 countries, including all of the ASEAN countries and other countries in the region such as Australia, China, India, Japan, New Zealand, and South Korea. Although the scope of the study in the first and second phases was limited to the energy sector, the third phase expanded the analysis of the supply side to include the constraints of food and agriculture in addition to the potential of biofuel trade. In all phases, the study focused on conventional (or first generation) biofuels.

The potential depends on demand and supply outlook. The study's major finding on the demand side is the exceptionally large demand by Indonesia. Assuming Indonesia's demand will not change, one of the most important findings is that a shortage of bioethanol may soon be experienced, if there is no progress in the efforts to increase productivity and in using unused land effectively. Another important message from the findings is that biofuels in Asia should not be separately considered from agriculture, as it is already integrated into the market. The success of biofuel utilisation in Brazil and Thailand indicates that there are methods of sustainably developing food-compatible biofuels. In Asia, food-compatible biofuels will continue to be the primary sources; however, the supply potential of agriculture-oriented conventional biofuels in the region of 16 countries may fail to catch up to the fast growth of demand before the 2020s.

The core strategy suggested in this study is to improve the enabling environment: improve productivity and enhance regional cooperation for trade and energy security. Also, the development of next generation biofuels as a mid- to long-term solution should also be pursued in line with the development of energy-agricultural integration for the security of both sectors.

Chapter 1. Introduction: The Growing Importance of Biofuels in Asia