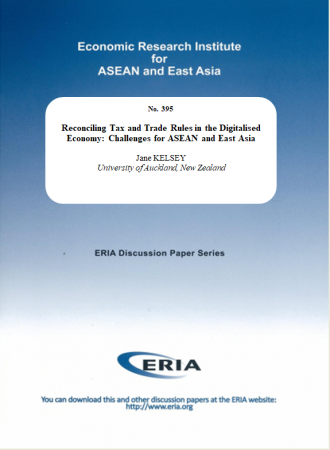 As the digital economy expands in scale, scope, and form it poses major challenges for public revenue and tax policy and administration in Asia and other parts of the global South. When attempts led by developed countries at the OECD-led Inclusive Framework on Base Erosion and Profit Shifting (BEPS) to agree on new norms for taxing digital giants like Facebook, Google, and Amazon stalled, individual countries, including a number of developing countries in Asia, began developing their own responses, notably the adoption of digital services taxes. High-level compromises have recently been announced at the OECD, but the details are yet to come and are not expected to address the needs of developing countries to effectively tax the activities of digital giants operating from offshore.

As countries seek effective and workable means to tax the digitalised economy, existing and proposed international rules on digital trade in free trade agreements, and plurilateral moves to develop electronic commerce rules in the World Trade Organization, may fetter their ability to do so. To date, very little attention has been paid in trade negotiations to the consequences of these developments for countries’ tax regimes. Nor have the adequacy, effectiveness, and workability of the tax exceptions in trade and investment agreements been properly re-assessed. Many governments are only becoming aware that trade rules may constrains their ability to regulate the (poorly understood and fast moving) digital domain after they have signed up to them.

A series of investigations by the US government under Section 301 of the US Trade Act 1974 into digital services taxes, including those adopted by India and proposed by Indonesia, provides a real-world basis on which to assess how binding and enforceable digital trade rules might be used to challenge digital tax measures at the unilateral, bilateral, and multilateral levels.

In highlighting these risks, the paper aims to provide a framework for the tax and trade divisions of governments in ASEAN and East Asia to reflect together on the potential for proposed digital trade rules to impact negatively on their public revenue.