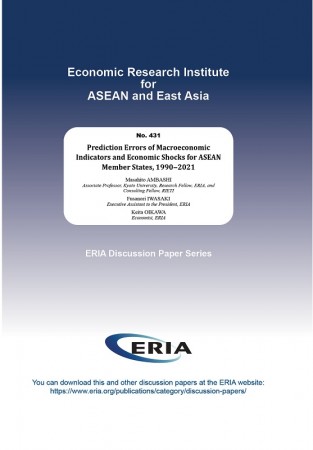 In this study, economic shocks on six selected Association of Southeast Asian Nations (ASEAN) Member States (i.e. Indonesia, Malaysia, the Philippines, Singapore, Thailand, and Viet Nam) are analysed in three dimensions: global, domestic, and uncertainty. Annual actual and prediction values from 1990–2021 macroeconomic indicators – from international organisations such as the Asian Development Bank – were collected, and macroeconomic shocks were calculated based on prediction errors (i.e. actual values minus prediction values). The first finding is that if prediction errors of the real gross domestic product (GDP) growth rates are negative, on average, the countries were significantly subjected to negative economic shocks that were not anticipated. Second, according to a correlation analysis of the actual values and prediction errors of real GDP growth rates, economic fluctuations and shocks are highly synchronised within the countries as well as with the world, as previous literature has indicated. Finally, by conducting regression analyses regarding the prediction error of real GDP growth rates separately for each country, (i) variations of the global real GDP growth rate are positively associated with countries’ economic shocks; (ii) the previous estimates have different quantitative significance amongst the countries; (iii) residual variations approximate country-specific, domestic shocks; and (iv) global and country-level uncertainty indices are correlated with negative economic shocks in some countries. Based on this dataset, the effect of the COVID-19 pandemic is also reviewed, and economic and historical backgrounds are examined that caused past economic shocks to these ASEAN Member States.