Growing an ASEAN Voice?: A Common Platform in Global and Regional Governance 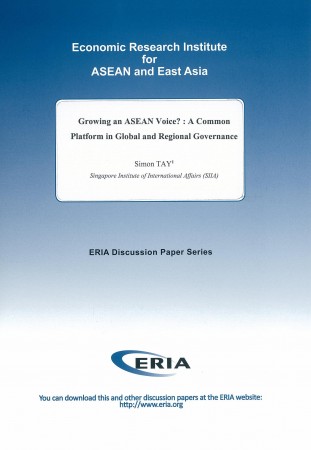 As ASEAN moves towards Community, the group's increasing integration combines with extrinsic factors to increase the expectation and need to become play a more significant role in regional and global affairs. Yet ASEAN has had to date only a limited experience and its ethos of unity needs to be reinforced. The group faces many challenges in taking on such a regional and global role, including the very different levels of development of its member states and divergences in political and other interests. There are however precedents for ASEAN to act and speak in unison on both political-security issues as well as economics and an increasing need and will to do so.

As the group begins to take on a central role in the region and first steps on the global stage, there remains the challenge of maintaining ASEAN unity, fostering shared perspectives and thereby forging an ASEAN platform or common voice in international forums, negotiations and institutions.

The essay explores this issue and attempts to provide recommendations toward engendering such common ASEAN positions and platforms in international arena beyond 2015. It argues that ASEAN should aim to create and reiterate norms to emerge as a normative power. However, even as a common voice and platform grows, ASEAN member states should be allowed to access their own existing channels and coalitions. An ASEAN common voice and platform should not be a monopoly or main conduit but an additional and supplementary avenue that each ASEAN member states can access. The essay concludes with some suggestions on the emerging needs and opportunities for ASEAN's common voice and policy prescriptions.