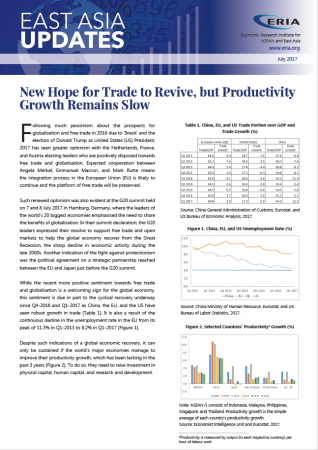 Following much pessimism about the prospects for globalisation and free trade in 2016 due to 'Brexit' and the election of Donald Trump as United States (US) President, 2017 has seen greater optimism with the Netherlands, France, and Austria electing leaders who are positively disposed towards free trade and globalisation. Expected cooperation between Angela Merkel, Emmanuel Macron, and Mark Rutte means the integration process in the European Union (EU) is likely to continue and the platform of free trade will be preserved.

Modi administration is implementing the comprehensive multiple Goods and Services Tax (GST) that replaced the complex multiple indirect tax structure on 1 July 2017; it aims to improve competitiveness, increase transparency, and improve tax collection. While on the positive side the reform is expected to improve the ease of doing business as it brings India a step closer to a One Country-One Tax system, the implementation of the GST is likely to be another blow to Indian economic growth in the short term.

The three biggest economies of the Association of Southeast Nations (ASEAN) - Indonesia, Malaysia, and Thailand - have maintained healthy growth driven by robust export earnings in 2017. Monetary conditions have also stabilised as domestic liquidity is maintained as manifested in stable short-term interest rates and stable currency performances in the first half of 2017.