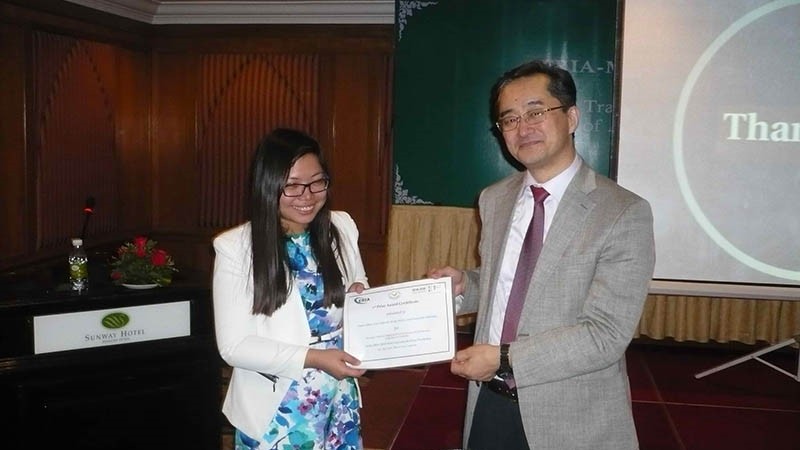 The final event of the ERIA - Cambodian Ministry of Economy and Finance (MEF) Economic Policy Modelling Workshop series was held on 23 May in Phnom Penh, with the writers of the three best research papers receiving awards.

First prize went to a team of five young economists from MEF for their research paper, Potential Output and Growth Scenarios in the Medium and Long-Run for Cambodia. The award, received by Ms Vanne Khut on behalf of the group, was presented by Professor Kimura, Chief Economist of ERIA. Second and third prizes went to teams for their papers on Linkages and Economic Effects: Analysis from Cambodia Input-Output Table and Potential Output and Growth Challenges for Cambodia in the Medium and Long-Run, with prizes presented by Dr Phan Phalla, the Director General of Policy Department at the Ministry of Economy and Finance and Mr Arjun Bisen, Second Secretary, Australian Embassy, respectively.

The workshop series was facilitated by the Asia Growth Research Centre, Ngee Kongsi University of Adelaide, as part of ERIA's Capacity Building Programme. The award ceremony was tied to a National Policy Dialogue entitled Trade, Investment and the Growth Potential of ASEAN and Cambodia Post-AEC intended for government officials. H.E. Mr Vongsey Vissoth, Secretary of State, Ministry of Economy of Finance, attended the event, and in his Welcoming Remarks highlighted the importance of effective policies to increase sustainable and inclusive growth. Although effective government policies have been adopted by the government to generate strong growth for the past decade, the challenge is to adopt more forward looking strategies for the Cambodian economy.

Professor Fukunari Kimura, in his Opening Remarks, emphasized the importance of utilizing global value chains effectively and to focus on industrial agglomeration not just integration. Presentations were also made by Professor Kostas Mavromaras of Flinders University on Structural Change and Education Policy: Drivers of Growth for ASEAN, and Professor Shandre Thangavelu of the University of Adelaide concerning Emerging Challenges in ASEAN Post-AEC: The Impact of TPP and RCEP. These presentations were followed by a panel discussion and questions from participants.

The event, attended by over 40 participants, was held at the Sunway Hotel, Phnom Penh, and was co-organized by MEF along and Asia Growth Research Centre, Ngee Kongsi University of Adelaide.