Why Thailand abstained in UNGA vote 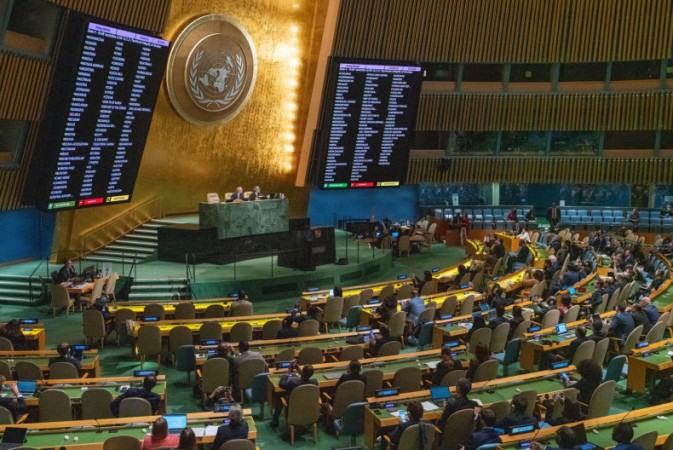 By Mr Kavi Chongkittavorn, Senior Communications Advisor:  After Thailand abstained from voting at the UN General Assembly on Oct 12 before the 11th Emergency Special Session of the UN General Assembly, the country was bombarded with comments, mainly negative, over its decision. The other 34 countries that took a similar stand were not in the news because they were expected to do precisely that.

That helps explain why Thailand's international decision matters a lot -- something that its own citizens, friends, and allies have taken for granted. Although its abstention did not change the equation of the current conflict in Ukraine, it has more to do with Thailand's concern about the next chapter of the ongoing conflict impacting the economy and security of the rest of the world. In its explanation of the vote, it is clear that its positions and adherence to the UN charter and international laws have not changed. To comprehend the rationale of this landmark decision, Thailand's past diplomatic practices must be part of the consideration as it has preserved the country's national sovereignty from Western colonialists, which annexed parts of Thai territory. The decision was more than skin deep as it involved a combination of factors and circumstances -- immediate and long term as well as internal and external aspects. At least 10 reasons can be identified.

1. First of all, this is an extraordinary year for Thailand as it is commemorating its 75th year of ties with the UN, which Thailand joined after the end of World War II. It was a life-saving moment for the country, which was seeking international shelter for its post-war debilitated position. Throughout seven-and-a-half decades, Thailand has been a faithful member of the UN with an unwavering commitment to the UN charter. Its dedication to the UN has never been in question.

2. Throughout this year, Thailand has successfully reconnected with its UN counterparts by actively taking part in all UN-sponsored forums. In addition, the country also reaffirms its confidence in the multilateral system which is at the centre of the global development agenda. Lest we forget, since 2016, Thailand has been the coordinator for Asean and the UN on the sustainable development agenda. Both organisations have synergies in their sustainability goals.

3. Thailand's desire to reshape the global agenda is paramount and has been quite visible. As the chair of Apec 2022, the host has a grandiose plan to promote the new economic model known as the Bio-Circular-Green (BCG), which is very much in line with the UN sustainable development goals. Currently, senior officials are working on the substance of the Bangkok Goal on the BCG, which will contain the future action plans and aspirations of Apec cooperation in sustainable development.

4. On March 2, Thailand voted to condemn Russia's invasion of Ukraine along with the majority of UN members. It was a clear choice. However, since then, nearly nine months have elapsed without any progress in peaceful dialogue. In addition, Bangkok has been calling for humanitarian assistance to victims of the Russia-Ukraine war. Thailand also stands ready to help with the peace process if need be.

5. By abstaining from the vote on Oct 12, Bangkok has quickly become the talk of the global diplomatic circuit. Now its voice is being heard that the mad-mad world of war in Europe is a no-win situation. An off-ramp must be found that will bring a quick end to the war. In its 75-year history at the UN, Thailand would abstain from voting if the resolutions sounded "murky", otherwise its vote would always be a supportive one.

6. Thailand's position is clear regarding the current situation in Ukraine. The four-paragraph explanation of the vote pointed out that the vote took place during "an extremely volatile and emotionally charged atmosphere", which "marginalises the chance for crisis diplomacy to bring about a peaceful and practical negotiated resolution". Bangkok also fears that the current conflict may push the world toward the brink of nuclear war and global economic collapse.

7. Thailand's fear of nuclear Armageddon is genuine. This month 60 years ago the Cuban crisis nearly brought the world to the brink of such a calamity. With the US and Russian leaders in a zero-sum brinksmanship game, it is important that the international communities bring pressure to bear on them. During 2018-2019 before the Treaty on the Prohibition of Nuclear Weapons (TNPNW), which came into force in early 2021, Thailand played an active role in various working groups to shape the substance of the treaty. The gist of the TNPNW forbids the deployment of nuclear weapons on national territory. Nuclear powers have refused to sign the treaty. Bangkok was serious when it mentioned the likelihood of nuclear war in Europe and that no country would be able to escape the fallout.

8. During the 10-day period from Nov 10-19, the whole world's attention will be on this part of the world. Three summits -- Asean, G20, and Apec -- are being held in Phnom Penh, Bali, and Bangkok respectively. All key international players have a once-in-a-lifetime opportunity to right the wrongs and make peace. Some leaders have chosen to attend and skip different summits, but the venues remain unchanged. In the case of the Apec leaders' meeting, Vice President Kamala Harris is coming. The most important point that needs to be made is that nobody boycotts the Bangkok meeting.

9. In addition to the leaders of 22 economies in the Asia-Pacific, for the first time, French President Emmanuelle Macron and Saudi Crown Prince and Prime Minister Mohamed bin Salman are attending Apec 2022 as guests of the chair. Mr Macron's participation is significant as he will bring a new Europe to Asia. His vision of an independent Europe will resonate well in the region. With the ongoing energy crisis, the inaugural presence of Crown Prince Mohamed, the leader of one of the world's oil exporters, also sends a strong signal of the new dynamic of Apec cooperation.

10. Like it or not, Thailand is now a neutral ground for all powers to engage in the search for peace. After all, the Apec meeting is not about politics, it is about economic development, improvement of human wellness, post-pandemic recovery, and sustainable development. With the world's greatest powers and economies converging in Bangkok, if they so desire, on the sidelines they can talk about peace instead of increasing missile exchanges and more economic sanctions which are only deepening the energy and food crises.