Towards a Disaster Resilient Economy in East Asia 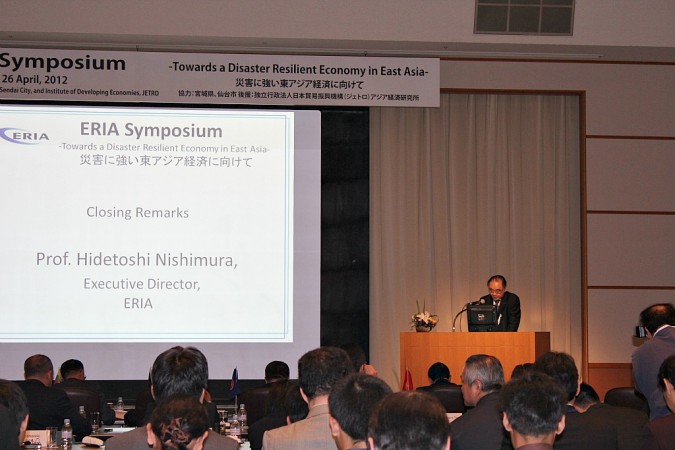 ERIA Sendai Symposium on "Towards a Disaster Resilient Economy in East Asia" was held on 26 April 2012 in Sendai, Japan. In the context of the ASEAN Roadshow.

ERIA organized this symposium in cooperation with Miyagi Prefecture, and Sendai City and with the support of Institute of Developing Economies, JETRO (IDE-JETRO). It was attended by ASEAN Economic Ministers, Mr. Yoshihiro Murai, Governor of Miyagi Prefecture, Ms. Emiko Okuyama, Mayor of Sendai City, Government officials, experts, people from private sector and economic organizations with around 200 participants.

At the symposium, Mr. Hiroshi Okuda, Governing Board Member of ERIA (Governor of JBIC) made a key note speech, Mr. Boonsong Teriyapirom, Minister of Commerce of Thailand and  Dr. Kan Zaw, Deputy Minister for National Planning and Economic Development of Myanmar, and Ms. Kazuko Koori, Parliamentary Secretary for Reconstruction of Japan made a presentation about the reconstruction process from the disasters of each country. Dr. Lim Hong Hin, Deputy Secretary-General of ASEAN, Prof. Fukunari Kimura, Chief Economist of ERIA, Mr. Ikumo Isono, Economist of ERIA made a presentation about Connectivity Enhancement towards Disaster Resilient Society in East Asia.

Mr. Hidetoshi Nishimura, Executive Director of ERIA made closing remarks, saying that ERIA will set up disaster management as one of the flagship projects for this year and support the establishment of disaster-resilient networks in East Asia. At the symposium,   Mr. Murai, Governor of Miyagi Prefecture, explained the proposal by reflecting on ERIA 4th Governing Board Statement in his presentation.

Before the Symposium, ERIA Reception was held on the same occasion and Dato Paduka Lim Jock Hoi, Chairman of ERIA, made an opening speech.