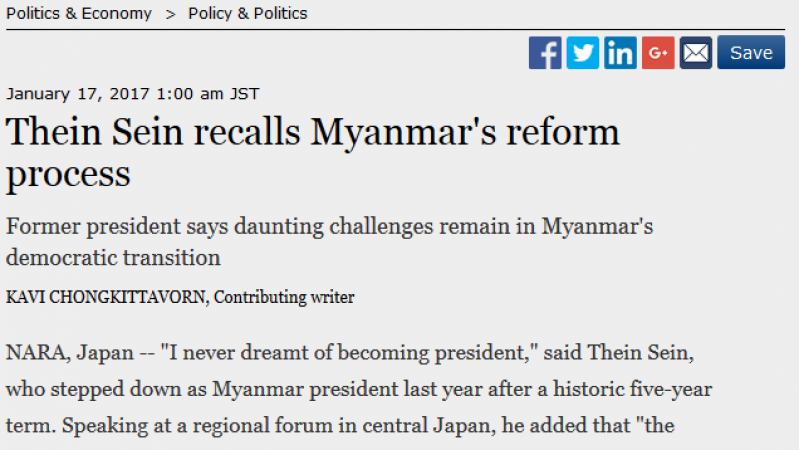 Editor's note: This article was originally published in Asia Nikkei on 17 January 2017. ERIA was mentioned as presenter of the Third Asia Cosmopolitan Awards.

NARA, Japan -- "I never dreamt of becoming president," said Thein Sein, who stepped down as Myanmar president last year after a historic five-year term. Speaking at a regional forum in central Japan, he added that "the situation of the country and my destiny drove me toward that destination."

Thein Sein's presidency, which began on March 30, 2011, is seen as particularly consequential as he oversaw dramatic changes that opened Myanmar to the world after decades of isolation and economic stagnation from 1962, when the country came under military rule.

In his first public speech since he stepped down on March 30, 2016, Thein Sein spoke about Myanmar's democratic development and economic progress at a regional forum and awards ceremony convened by the Jakarta-based Economic Research Institute for ASEAN and East Asia. At the event he was awarded the institute's grand prize of the Third Asia Cosmopolitan Awards for his reform efforts. The prize is given every two years for outstanding contributions by individuals or leaders to the economic, political, and cultural development of East Asia. The previous prize winner in 2014 was former Indian Prime Minister Manmohan Singh.

Thein Sein said he faced many challenges as president of a country with 100 different languages and 135 ethnic groups. These challenges focused on three main areas, he noted, from overseeing the transition from military to civilian rule, ending ethnic conflict, and transforming a centralized economy into a market-oriented one.

"These initiatives had to be implemented simultaneously as they were interrelated and interdependent," he said, noting that his government's ambitious economic and political reforms had to be "closely linked, like a chain."

In late 2010, Aung Suu Suu Kyi, leader of the then-opposition National League for Democracy, was released from house arrest just after Thein Sein won the national election. As president, Thein Sein took the decision to allow her to run in an April 2012 by-election that swept her into parliament, as part of efforts to achieve "political stability," he said. He subsequently released hundreds of political prisoners and eased restrictions on both traditional and social media -- to the extent that Myanmar now ranks relatively highly in press freedom among Southeast Asian countries.

In his weekend speech, Thein Sein said the spread of mobile phones had been a "key factor" in alerting the leadership to the conditions and attitudes of the population. A sharp fall in the price of mobile SIM cards -- once costing more than $1,500 and now little more than $2.50 -- and the growing availability of smartphones and cheaper, high-quality internet services since 2012 had contributed to their widespread use, he noted.

Thein Sein spoke proudly of his government's achievements in economic reforms, planning and development. When he took office, the country's poverty rate among the population was between 26% and 30%, but has since fallen to below 22% by some estimates. "National poverty reduction plans were laid down and implemented to achieve the Millennium Development Goals of the United Nations," he said.

During his term, about $6 billion in international debt was canceled and the country received bridging loans from Japan as well as assistance from other creditor countries. Myanmar also received aid from the International Monetary Fund, the Asian Development Bank and Japan among other key donors to pursue long-term economic development, while gross domestic product has grown by an average annual rate of 7%.

Thein Sen noted that although an economy can grow without democracy, only a democratically elected government ensures that the majority of the people can enjoy the economic benefits.

Of all issues that faced his government, the most intractable was the elusive peace process with more than 20 ethnic armed groups, noted Thein Sein. While emphasizing his efforts to end fighting between the groups and Myanmar's armed forces, including the signing in 2015 of a draft ceasefire accord with eight ethnic armed groups, Thein Sein admitted that achieving a sustainable peace was not easy, given the deep roots of some conflicts that have stretched over the last 60 years. But, he added, the notion of a comprehensive ceasefire pact with all ethnic armed groups was "not impossible, either."

A nationwide ceasefire agreement alone could be possible without a fully democratic system, he said, "but only a democratically elected government can build a sustainable peace," he added.

At the award ceremony, Thein Sein commented for the first time since leaving office on the ongoing sectarian violence in Rakhine state between the majority Buddhist and minority Rohingya Muslim populations. Violence broke out in Rakhine state in the second year of his administration, leaving several hundred people dead and an estimated 140,000 mainly Muslim people homeless, and has flared periodically between the two groups since then.

Thein Sein said people should be "mindful" of the complex historical background to the sectarian conflict, which makes a simple solution difficult. "I believe every human being has the right to enjoy a peaceful and secure livelihood. On the other hand, terrorism under any manifestation must not be accepted or tolerated," he noted.

While the former president said he favored humanitarian assistance and negotiations to find a peaceful resolution to the sectarian problems, "the issue of Rakhine state should remain as the internal affair of Myanmar," he noted. "Outside interference will only complicate the situation rather than solve the issue."