The Rise of Anti-globalisation and Its Impact in Asia 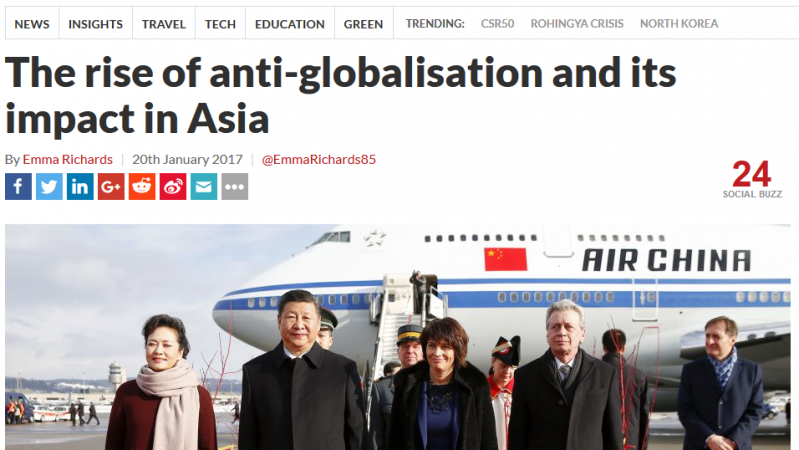 Editor's note: This article was originally published in the Asian Correspondent on 20 January 2017. The President of ERIA Prof Nishimura was quoted.

THE world appears to be experiencing a globalisation backlash with an assault coming from both economic and societal fronts. In this changing world, the two defining characteristics of globalisation – increased global trade and greater economic participation in trade – now look poised for an extended downward trend.

While leaders, bankers and economists meet in Davos this week to extol the virtues of a globalised world, their favoured view of the global approach is not one that is shared the world over.

Global trade is no longer driving global growth like it once was. It grew last year at just 1.7 percent, lagging world economic growth for the first time in 15 years and for only the second time since 1982, according to the World Trade Organisation, which expects a further slowdown in 2017.

The decline in world trade, cross border lending and foreign direct investment, and the increase in protectionist measures together will have profound implications for cross border global flows. And reversal of these multi-decade dynamics is likely to be have an impact in Asia.

The rise of anti-globalisation

Globalisation has become deeply discredited in parts of the developed world, as a result of the 2009 financial crisis.

The job cuts, house repossessions and instability that came with it left a swathe of the population marginalised and disenfranchised.

The predominantly white working class in both Europe and the U.S., unhappy with their current standing, has shown a growing lack of willingness to tolerate the status quo. While globalisation has certainly been massively influential in lifting millions of people out of poverty around the world, for many in the west, the benefits aren’t evident.

While the affluent central bankers, CEOs, celebrities and leading economists who are congregating in Davos this week have undoubtedly benefitted from the global economy and the breakdown of national borders, their standpoint, and lifestyle, could not seem further from reality for those they leave at home. And the push for global, rather than national, solidarity does not resonate with much of the populace.

Backlash to a system that doesn’t work for everyone is almost inevitable, and that’s exactly what we seem to be seeing here.

Wage stagnation, insecure jobs and widening inequality between rich and poor are just some of the factors that are laying the foundations for the rise of narrow nationalist policies, populist politicians and anti-globalisation sentiment that we are seeing throughout western politics.

Donald Trump embodied this sentiment in his election campaign, tapping in to the concerns of the frustrated working class, acknowledging the damage that globalisation had done to their communities and America’s standing on the world stage, and promising to do something about it. His slogan – Make America Great Again – alone harps back to a time when America was prosperous and dominant in the world.

His campaign also stuck to the common pillars on which the populist movement appears to be built – bring manufacturing back, keep imports out and send foreigners home.

So far, from what we can glean from the president-elect’s comments, he appears to be sticking to them. His continued reference to trade protectionism, his threats to raise taxes on American companies that manufacture abroad, and his escalating attacks on China all point towards a step back from global trading.

But it is not just the United States who has been pushing policy in this direction.

While business ties between the United States and China were once considered the bedrock of the two countries’ relationship, of late they have become a major source of friction. And not only due to Trump’s rhetoric.

While China’s President Xi Jinping was making a vigorous defence of free trade in Davos on Wednesday, the Washington Post reported that fear was rising within the American business community that Xi’s sentiment was not being transferred to policy back home.

Xi argued that “pursuing protectionism is like locking oneself in a dark room” in the hope of avoiding danger but, in doing so, cutting off all “light and air.”

And stated that “no one will emerge as a winner in a trade war.”

However, there is the opinion amongst some businesses that, while Xi may be talking the talk, he isn’t walking the walk.

According to a recent study by the American Chamber of Commerce (AmCham), and reported by the Washington Post, many American companies are not happy with the reception they are receiving from the current Chinese administration.

The annual survey of business conditions in China found that four out of five companies feel less welcome in China than they did last year, with many feeling that Xi is himself turning towards more protectionist policies.

AmCham chairman, William Zarit, said in a statement, “it is becoming apparent that the benefits of globalisation are being taken for granted or even forgotten, as the challenges of managing a complex, modern economy increase.”

And it’s not just America who feels this, it is also felt in other economies, with German Ambassador Michael Clauss saying in a statement on Monday that “It often appears that somewhere down the line, political assurances of equal treatment give way to protectionist tendencies.”

“There is a growing worry by European companies that some line ministries and possibly local actors are trying to tilt the playing field towards purely domestic companies.”

And this cooling of sentiment towards globalisation is having an impact in the business world.

The top 5,000 multinational enterprises have been pulling back on direct capital investment and overseas acquisitions in the environment of political uncertainty and dramatically rising protectionist barriers to trade in recent years. Global Trade Alert has found that protectionist measures rose from almost zero in 2008 to over 6,300 trade restricting measures in 2016.

According to their latest forecasts, UNCTAD expects the world’s largest companies to invest 10 to 15 percent less in their overseas operations in 2016, effectively trimming foreign direct investment by around US$250 billion.

With the cross border flow of finance, people and physical capital decreasing, globalisation is facing its biggest challenge yet.

The advances in technology that the world has seen over the last decade also pose its own threat to globalisation.

The allure of cheap labour in developing countries is not the draw it once was. With advancements in automation and digitisation, the advantage of low-wages has been undermined as companies are now able to manufacture products at home with minimal workforce.

Not only will this see an increase in new companies setting up in their western countries, but will also see many leaving the emerging economies and “reshoring” to where the technology originates.

According to a report released by the Reshoring Initiative in the United States, the bleeding of manufacturing jobs to other countries has stopped, with the U.S. seeing a total of 249,000 manufacturing jobs returning home from offshore between 2010 and 2015.

Manufacturers are now able to generate the same workflow without being labour intensive. As Richard Yetsenga, ANZ Chief Economist, points out, these days, due to the rise in automation, it takes just five workers to create US$1 million worth of output in contrast to the 25 workers needed back in 1980.

While this trend of “reshoring” won’t necessarily fulfil Trump’s promise of bringing many manufacturing jobs back to America, it will enable American companies to run their factories on home soil, removing their reliance on labour intensive factories in developing nations.

So where does this leave Asia?

The cooling sentiment on globalisation and the rise of technology could have profound consequences for emerging economies that have built their fortunes on exports.

The old growth model of labour intensive manufacturing-for-export that worked for so many countries in the past won’t work anymore.

Asian economies that have successfully used this model to industrialise, develop the skill set of their population and in the process ascend the value chain into middle or high income nations, will likely be safeguarded from the downturn in markets.

For example, the Association of South East Asian Nations (ASEAN), including Brunei, Cambodia, Indonesia, Laos, Malaysia, Myanmar, the Philippines, Singapore, Thailand, and Vietnam, and the development of the ASEAN Economic Community (AEC) should ensure its members some protection from the unpredictability of international trade.

Should the U.S. adopt anti-trade policies “the strategic significance of both the Regional Comprehensive Economic Partnership (RCEP) and AEC would increase,” Pradumna Rana, associate professor of the international political economy program at Nanyang University, told the China Daily Asia Weekly.

“ASEAN countries have tariffs on 76.85 percent of their tariff lines, with tariff rates of 0-5 percent being applied on 99 percent of these lines,” he said. “This has led to an increase in intra-regional trade which has enhanced the region’s resilience to adverse global headwinds.”

Hidetoshi Nishimura, president of the Economic Research Institute for ASEAN and East Asia, shares his optimism. “The current anti-globalisation sentiment will force ASEAN to enhance the atmosphere of their own economic integration further,” he told China Daily Asia Weekly.

The main concern is raised for those emerging economies that are yet to take full advantage of the manufacture-for-export model.

Countries such as India that are taking the first steps towards industrialisation could see their process disrupted, or possibly halted, by the threats of anti-globalisation.

They will face the prospect of factory jobs drying up, leaving the 10 million new young people entering the workforce each a year with uncertain futures.

Unemployment will likely go up as the workforce that was geared towards the manufacturing techniques of old will be ill-prepared for the changing tides of automation and be left behind.

India has lofty aspirations to increase the share that manufacturing contributes to the economy from its current point of 16 percent to 25 percent; a feat that seems difficult in the changing times.

With automation undercutting their labour costs, “Asia needs to be worried,” said Serguei Netessine, professor of technology and operations management at graduate business school INSEAD in Singapore. “It needs to be sowing the seeds now. It cannot afford to wait until it is too late,” he told Asia Weekly.

Without being able to rely on the old methods, we could start to see the emergence of a divided Asia; one characterized by those economies that have used trade and industrialisation to scale the value chain, and another group of economies who will have to engineer different and more imaginative models if they are to do the same.