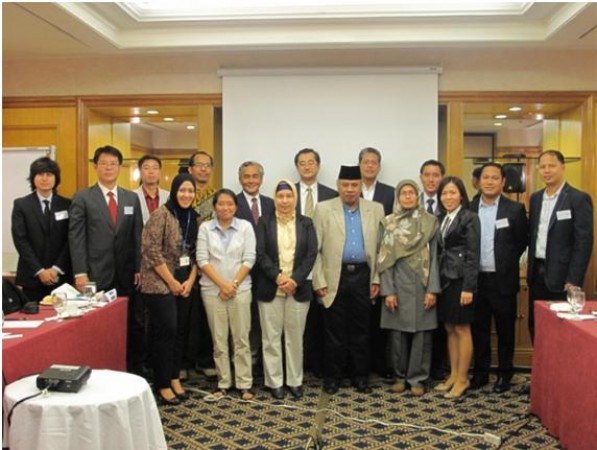 The Economic Research Institute for ASEAN and East Asia (ERIA) hosted the second workshop on the PPP role in infrastructure development in ASEAN, themed "Its Role and Expectation in Transportation, Energy, and ICT Development" in Manila, Philippines on 13-14 February 2012.

The second workshop discussed the progress report of the project whereas eleven researchers from five countries reported their works. The focus of the project is on infrastructure development particularly transportation, energy, and ICT in Indonesia, Malaysia, Philippines, Thailand, and Vietnam.

On the first day, the Working Group members have drawn several interesting findings, including the context of country uniqueness, regulatory setting, institutional support, supportive arguments behind the policy, funding system and economic impact. Further analyses on updated issues and consistent outline are agreed and will be followed up before the final workshop in April.

On the second day, the WG is treated by the courtesy of the PPP Center of Philippines. The Executive Director of PPP Center of Philippines, Ms. Cosette V. Canilao, held the presentation and lively discussion with the researchers in the PPP Center office. Several topics discussed including: financial aspects, preparation process, inter-departmental coordination, and types of scheme and subsectors. After the discussion, the WG visited a PPP Project in Metro Manila, known as MRT3 Project. The construction of the project started in 1997 and it began to operate in 2000. Nowadays, the LRT provides services to half million of passengers daily and is planning to expand the coverage. The visit to PPP Center and MRT3 Project has given important experience and broadened the perspectives of the WG members.

The workshop is concluded with commitment to finish and cross-review the reports. The project will be completed by June 2012.

Workshop on Public Private Partnership in ASEAN Member Countries Its Role and Expectation in Transportation, Energy, and ICT Development.pdf