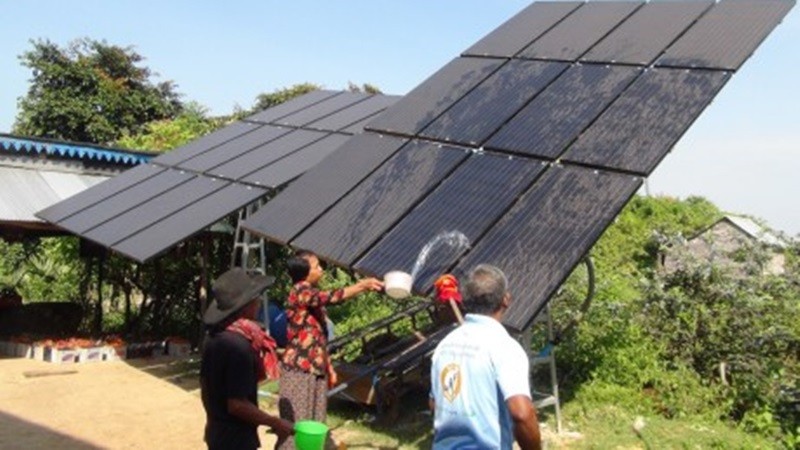 Under a five-year project first implemented in 2008 through the World Bank-funded Rural Electrification Fund (REF), around 12,000 households installed SHS. Initially, the rate of uptake of these systems by rural households was very low. This was mainly due to the fact that at first, the project required rural households to pay the installation cost upfront, with these costs amounting to US$ 260 for a 30 Watt peak system and US$ 333 for a 50 Watt peak system. Many poor households were unable to afford these costs. Thus, after five years, when the cause of the low rate of uptake was identified, a new business model was adopted. Under the new model, households were able to pay on the basis of a daily rate, spreading their costs across time. This new model resulted in a rapid uptake of the system towards the end of the project, which terminated in 2012. Following the termination of this project, in the period from 2014 to 2015, under the management of Electricity of Cambodia (EDC), the REF sold and installed 13,240 50 WP SHS to rural households in remote areas.

The lessons learnt from Cambodia's experience could be valuable for a number of other countries and communities within ASEAN, where approximately 134 million people still do not have access to regular supplies of electricity. While at 31.1%, Cambodia's rate is the lowest amongst these countries, it is closely followed by Myanmar, where the rate stands at 32%. In addition, the rate in rural areas stands below 50% in the Philippines and Lao PDR. Lack of access to electricity has a negative impact on human development, affecting health and education. It also constrains economic activity and can exacerbate environmental issues.

In fact, Cambodia recorded significant success in promoting SHS, despite the fact that the cost of this system in Cambodia was relatively expensive compared to the costs of similar systems elsewhere in the world. To better understand why rural households accepted the system to the extent they did, the Economic Research Institute of ASEAN and East Asia (ERIA) undertook an analysis of the Levelized Cost of Electricity (LCOE) provided by SHS and compared to its cost to the current electricity price in rural Cambodia. The study found that the current cost of electricity in Cambodia is very high, ranging from US$0.15/kWh in Phnom Penh to US$1.00/kWh in rural areas. This might explain the high level of acceptance of SHS, despite the relatively high upfront costs of the system in Cambodia. The study found that LCOE of SHS without any government subsidy is about 50 percent cheaper than the current electricity price in rural areas charged by electricity providers using diesel engine. With a government subsidy of US$100 per SHS unit, the LCOE of SHS falls to about one third of the current electricity price in rural areas.

The study proposed a number of recommendations that could be used to increase the uptake in Cambodia or elsewhere in Asia where the system may be implemented in the future. In particular, it found that the high initial cost of installing SHS was a major barrier on acceptance. Thus, it is very important to design an appropriate business model for rural households, such as by charging a daily fee rather than requiring households to pay the whole cost of installing the system upfront. It also emphasised the importance of efficiency throughout the whole SHS value chain, from procurement through to instalment, to ensure that transition and system costs are minimised.

The study also noted that compared to SHS, mini-grids powered by solar PV provided significant economies of scale, thus potentially offering lower systems costs. Thus, the authorities should consider measures to attract investments in these grids as a possible alternative.

Finally, the study noted that while these various systems had good potential to enable an increase in the rate of electrification, particularly in remote rural areas, the expansion of SHS and solar mini grid systems required that local technicians and small business entrepreneurs had the appropriate skills and capacities. Therefore, in order to ensure the success of programs that emphasise the use of these systems, measures to build these capacities are essential.