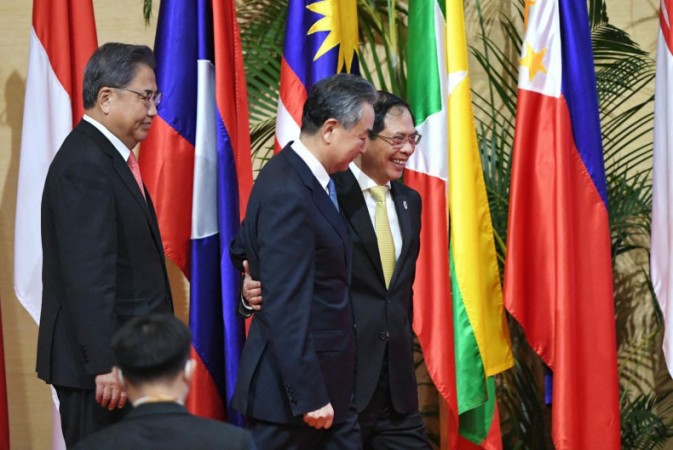 By Mr Kavi Chongkittavorn, Senior Communications Advisor: To witness the dynamism of South Korea's rise and its relationship with Asean and each bloc member, it is important to attend the reception marking the national day of Vietnam.

It is rare for a host nation's foreign affairs minister to attend a national day reception of a country that has a mission in the capital. In fact, it is a given. That was not the case for Vietnam as South Korean Foreign Affairs Minister Park Jin attended the function held recently in a five-star hotel in Seoul. In front of the event hall, dozens of South Korea's well-known global trademarks and brands, out of the 8,000 companies who have invested in Vietnam, adorned the 50-metre walkway at the venue.

For this special occasion, Mr Park opened and wrapped up his remarks in Vietnamese, highlighting one of the most important bilateral ties his country has with a Southeast Asian country. These days, everything about Vietnam and Korea is on the rise with the attendant publicity. Over the past week, the two countries even celebrated the Lantern Festival together during Chuseok. The Republic of South Korea (ROK)-Vietnam year-long activities to commemorate the 30th anniversary of their diplomatic ties are still going on today.

As the third biggest economic partner, after China and the United States, Vietnam has a special place in the world's No.10 economy. After their three decades of relations, two-way trade revenue also increased 160-fold, going from US$500 million (18.2 billion baht) in 1992 to $80 billion last year. Both sides are hopeful that the volume will hit the $100 billion mark by next year. The economic prospects are endless thanks to the popularity of Korean-made electronic products and gadgets inside Vietnam, particularly smartphones. Over 50% of Samsung's output for sale in Southeast Asia and the rest of the world came from Vietnam.

Vietnam was also one of the few Asean members to quickly take advantage of post-pandemic tourism and opened up for tourists at the end of last year. This enabled Korean tourists to visit at the most crucial time. Now Korean tourists rank No.1 during the pandemic period. Before the outbreak of Covid-19, nearly 4 million Koreans visited in 2019.

The success of Korea-Vietnam economic relations has been the envy of other Asean members. It is now taken up as a case study by Thai government agencies and the private sector on best practices in both countries in cooperating and managing their relations. ROK-Thai economic relations are underdeveloped in comparison with those of ROK-Vietnam. Last year, ROK-Thailand trade volume was a mere $15.5 billion even though the two countries have been trading for the past six decades. In fact, the two countries still have to do lots of homework to match their interests in all areas due to the lack of mutual awareness and understanding. More specifically, Thailand has yet to appreciate South Korea's modern economic and innovative potential. The Thai Board of Investment and related agencies must provide incentives for Korean investors. Traditionally, the country is considered a prime area of investment by Japan, the United States and China. Therefore, they have been accorded higher attention and care.

However, in the coming years, Thailand needs to reach out to both public and private sectors to tap into Korea's growing economic clout as well as technological and innovative strengths. Sad but true, Thai policymakers have not utilised Korea's longstanding goodwill and trust towards the country. Lest we forget, Thailand was one of the 16-nation international forces under UN command participating in the Korean War. After the war, Thailand also helped South Korea with its water management. All these virtues and memories can still serve as a rock-solid foundation to push forward ROK-Thai ties to a new level.

After the financial crisis in 1997, ROK rose like a phoenix while Thailand and other Asean countries are still struggling these days. Over the past two decades, ROK has made many inroads by further strengthening ties with Asean. The overall statistics speak for themselves. Today, Korea has become a favourite place for Southeast Asians to work, study and travel. Last year, Asean citizens living in the country surpassed the half-million mark at 538,248. The largest numbers were Vietnamese at 208,740, or 39%, followed by Thais at 171,800, or 32%.

It must be noted here that Vietnam's educational ties with Korea are exceptional. According to the Asean-Korea Centre, last year there were 72,535 Asean students in Korea altogether of which 66,094, or 91%, came from Vietnam. The second and third largest groups of students came from Indonesia with 1,732, and Myanmar with 1,621 students. The wide gap between Vietnamese students and the rest of Asean demonstrates Hanoi's high level of enthusiasm for Korean education, especially in the fields of science and digital technology.

In contrast, last year, only 815 Thai students were enrolled in Korea. This year's figure showed the number of Thai students has dwindled further to just 542 -- a bizarre fact considering over 45,000 Thai students are learning Korean in schools and universities. One would have thought these students would then continue their education in Korea.

In fact, it was the contrary. Due to the popularity of Hallyu, or the Korean Wave, especially K-pop and K-drama, a large number of youngsters want to sing along to K-pop songs and follow Korean dialogue, or take up careers in service industries rather than pursue higher education in Korea.

By Mr Kavi Chongkittavorn, Senior Communications Advisor:  To be fair, in the entertainment world, numerous Thai talents have made it in Korea. Obviously, Lisa, or Lalisa Manobal, a member of Blackpink, has been the most famous Thai singer for quite some time. Others include Nichkhun Horvejkul, a well-known Thai member of 2PM, Kunpimook Bhuwakul or BamBam of GOT7, and Goonshipas Peonpaweevorakul, or Mintty. Currently, closed collaboration exists between Korean and Thai entertainment enterprises to promote and train Thai K-idols.

Unlike with its other major dialogue partners, Korea has no historical grievances with Asean members to hamper bilateral and people-to-people ties. According to a survey conducted last year by the Asean-Korean Centre of mutual perceptions of Asean and Korean youths, their general feeling was positive, coupled with high expectations for future cooperation. Of course, further efforts are needed to increase awareness among Korean youths to better understand the history and culture of Southeast Asia. In Asean, young people are receptive to Korean culture, especially in the entertainment field. This can serve as a people-centric platform to broaden and strengthen art and cultural cooperation, which will enhance mutual trust and respect for each other cultures.

After taking up new leadership in May, President Yoon Suk-yeol has made clear that Asean will remain the centrepiece of its regional and global diplomacy. To prove it, the Asean-Korea Center opened its branch on Jeju island last week to promote Asean to the broader Korean community. In the region, Seoul will continue to build on the solid foundations of Asean-ROK relations achieved over the years, especially through the New Southern Policy and its extended version.

Most significantly, the Yoon administration is currently working on its own Indo-Pacific strategy, which would prominently feature the strategic importance of Asean. In addition, at the recent Asean meeting in Phnom Penh, Mr Park also informed Asean of Korea's intention to apply for Comprehensive Strategic Partnership (CSP) status at the upcoming Asean-related summit in November. This bold and timely move came amid Asean's desire to expand strategic ties with selective dialogue partners. In more ways than one, it also showed Seoul's confidence toward Asean. As a CSP, Korea can further consolidate Asean centrality and promote peace, economic progress and stability. Together, they can implement their common strategic objective of preventing any external power from establishing hegemony in the region.