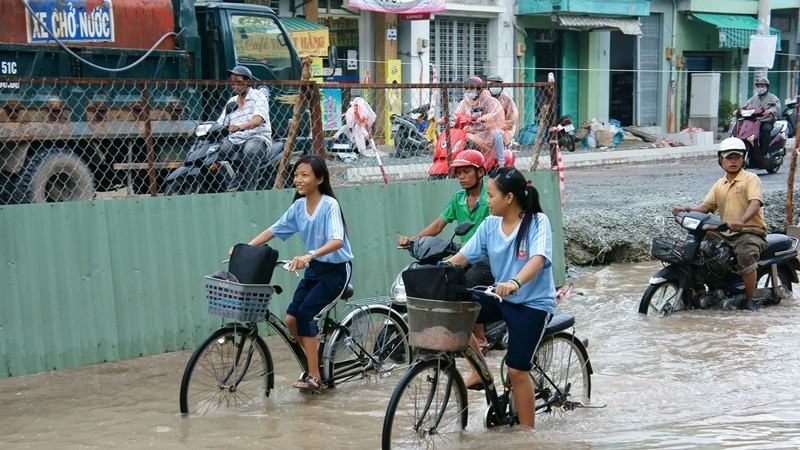 So it was perhaps with some irony to observers when US President Trump visited Viet Nam earlier this month, just after Typhoon Damrey claimed scores of lives amid widespread flooding, since researchers believe that extreme environmental events like hurricanes and typhoons are likely exacerbated by climate change.

The 2017 Atlantic hurricane season is now among the top 10 all-time most active seasons on record after Harvey, Irma, and Maria and these seemingly back-to-back catastrophic events should make us look deeper at ourselves.

Most climate scientists agree the main cause of the current global warming trend is the burning of fossil fuels, which emits greenhouse gases into the atmosphere and trap heat. Other human activities, from everyday activities to agriculture and deforestation, also contribute to the increase in greenhouse gases. The trapped heat increases the Earth's temperature and changes the climate.

With cheap fossil fuels as the main engine of economic growth, many political and corporate leaders are reluctant to reduce or replace it. And the business community has often seen environmental policies as a threat to competitiveness - but there are reasons to view resource efficiency (in other words, profitability and sustainability) as an opportunity.

Resource efficiency is the hallmark of the 'circular economy', a concept that has been around for decades and is gaining traction as a reaction to the traditional 'linear' business model of 'take, make and dispose'. It encourages firms to change the way they operate, and pursue sustainable economic growth by managing resources more effectively through reusing, recycling, and minimising landfills.

On the production side, the circular economy aims to minimise any negative effects to the environment, and waste from the production process is minimised or even eliminated as firms shift toward 'closed loop' production cycles. Hence, ensuring an efficient use of resources is the best way to balance economic growth and environmental concerns.

On the other hand, the circular economy can optimise consumption while minimising waste through the mindset of the consumer who embraces extending product lives. Such a consumer would repair an item rather than replace it, or choose a more durable product instead of a cheaper but less durable alternative.

And leading the way of the circular economy, are millennials and their propensity for a 'shared economy'. According to a 2015 Goldman Sachs report, millennials are poised to reshape the global economy because they are reluctant to buy items like cars, homes and luxury goods, preferring instead to access products without the burdens of ownership. Juniper Research's latest attempt to quantify the so-called 'sharing economy' sees it place a value on the sector of US$40.2 billion by 2022, compared with this year's US$18.6 billion.

The circular economy is forecast to generate US$4.5 trillion in additional economic output by 2030 according to Accenture, which identifies business models that decouple growth from natural resources and turn the focus to generating revenue from waste and innovative, customer-focused products and services. By comparison, PricewaterhouseCoopers predicted that Germany's gross domestic product by purchasing power parity in 2030 would be the seventh largest at US$4.707 trillion.

However, there are four main challenges to the circular economy.

First, is integrating the entire product lifecycle from raw material extraction to disposal (or preferably reuse and recycle) and completely closing it. Governments can promote the demand of circular products by fiscal incentives such as VAT reduction for secondary raw materials, tax on landfilling and tax incentives for producers or public procurement, which favour circular products.

Second, is the lack of a common framework that supports a circular economy and modes of sustainable production and consumption. With one, there would be greater international cooperation, and certainty and facilitation for investments.

Finally, it is undeniable that we need energy to recycle waste. But it does not take away from the necessity to substantially reduce the consumption of natural resources, to intensify reusing and repairing, and enforce longer product durability.

Many politicians are wary of the circular economy model because the effects of reducing the use of materials and the production of goods, and an extended use and lifespan of goods, do not all count towards economic growth. Therefore, governments have to support innovative business models based on closed cycles and resource efficiency.

In many developing countries, population numbers and economies are forecast to grow in the coming decades. The increased demand would have an impact on commodity prices, and pressure industries to use cheaper alternatives like second-hand raw materials. Hence, there would be room for negotiations between governments, businesses and civil societies to consider social, business and commercial benefits.

The circular economy model is still far from perfect, but it has a necessary objective to restructure the economy in a sustainable way. Policymakers have a responsibility to set a regulatory environment that encourages corporations to think creatively about the circular economy and cooperate on a global level. This would hopefully reduce the pressure on natural resources and temper the human-induced climate change.

This opinion piece has been published in Bangkok Post, and Jakarta Post. These opinions are his own and do not necessarily represent ERIA.Click here to subscribe to the monthly newsletter.